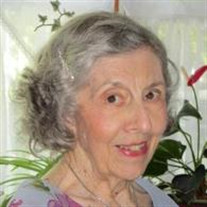 CROMWELL BROWN - Carolyn Walters, departed this earth on October 23rd 2018. Born September 7th 1921,she was the youngest daughter of Arthur Vernon Walters and Marjorie Alicia Dollard Walters. Beloved “sita” of Jeannette Winder. Carolyn was a longtime native Long Islander. Her childhood years were spent in East Williston, Oyster Bay Cove and Hempstead. During the early days of WWII, she met and married Curtis W. Cromwell of Manhasset, L.I. Curt was stationed in Georgia as a pilot in the US Army Air Force where the couple spent their first years of married life together. Following the war, Carolyn and Curt moved home to L.I., settling in Port Washington, where their son Timothy was born. Several years later, the family moved to the newly formed area known as Levittown and welcomed their four daughters Linda, Bonnie, Laurie and Melanie. Tragically, their life together was suddenly shortened by Curt’s death at the age of 46. Carolyn’s strength, perseverance, hard work and the love of her family helped them through this difficult time. Although she held many jobs throughout the years that followed, she had a long career with General Motors of Bethpage, until her retirement. In 1973, Carolyn married Robert Paul Brown and moved to Cutchogue to begin life on the North Folk. She made many new friends through her volunteer work and at church, and enjoyed boating on the Great South Bay. Robert died in 2008. Carolyn was blessed with both artistic and musical talents which lasted into later life. Her amazing soprano voice was a highlight of the Levittown and Cutchogue Presbyterian Churches. Her love of art was seen in the beautiful pastel portraits she created, as well as in the banners, sculptures, and weaving she made. Perhaps her greatest masterpiece in life was her immense circle of friends, together with loving nieces and nephews, and her immediate family. She is survived by Timothy Cromwell (Elaine), Linda Clune (Bill), Bonnie Tate (Richard), Laurie Habermehl (George) and son in law Dennis Walsh, husband of the late Melanie. Carolyn’s grandchildren are Heather Hess (Paul), Cody Drasser (Lindsay), Christian Drasser (Jennifer), Travis Tate, the late Luke Cromwell, Shea Amiruddin (Alex), Shannon Giordano (Dino), Ryan Habermehl (Kim), Garrett Tate, Joshua Tate (Dana), Jaclyn Habermehl, Eden Christie (John), James Habermehl, Sean Walsh (Allison), Justin Habermehl, Kristen Walsh and Tyler Walsh. She will be deeply missed by her adoring great grandchildren, Lucas, Laurel, Hunter, Jadon, Jolie, Billy, Aidan, Johnnie, Owen, Declan, Conor, Hadley, Everly, Eva, Lachlan and the late Jackson. A wake will be held on Sunday, October 28th 2018 at Robertaccio Funeral Home, 85 Medford Ave (Rt. 112) Patchogue, NY from 2-4 & 7-9pm. A memorial service will be held in November, details to follow. In lieu of flowers, donations can be made to the American Cancer Society in memory of Melanie Walsh.

The family of Carolyn W. Brown created this Life Tributes page to make it easy to share your memories.

Send flowers to the Brown family.