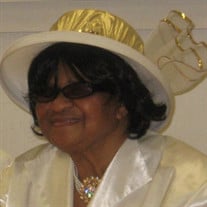 Carolyn Marie Parker affectionately known as “Marie,” daughter of the late Robert Parker and Fannie Ford Parker, was born on January 9, 1932 in Bridgehampton, New York. She departed this life after a long battle with a terminal illness on January 24, at her home surrounded by her loving family. A native of Bridgehampton, Marie confessed her belief in Christ and was baptized at an early age at the First Baptist Church of Bridgehampton under the Pastoral leadership of Rev. William Collins. She later became a member of the Mount Olive Baptist Church of Medford, NY where she faithfully served on the ‘Mother Board’ for many years. In her later years, Marie continued seeking the Lord joining the Mount Calvary Apostolic Church under the leadership of Bishop William G. Griffin, Sr. Marie attended the Bridgehampton School District early on, later obtaining her New York State GED. In 1969, she moved to Bellport, NY with her ten children whom she loved dearly. After moving to Bellport, Marie was employed by theBoys Harbor Camp where she remained for 30 years working in both the East Hampton and New York City locations. It was there that she was able to perfect her cooking skills. Marie comfortably moved around the kitchen making some of the most delicious and memorable meals for all. She truly enjoyed cooking and reading a good novel. After making spiritual peace with God’s plan for her life, Marie would very often remind us that she “had a good life” and always felt blessed that God had allowed her to see her “4th generation.” Marie was a loving and caring mother, sister, aunt, and friend. Predeceased by her parents, five children, Jeffrey George, Vincent George, Donald Parker, Paul George, and Carolyn Dorita George; her four sisters, Dorothy Morris, Willie Mae Bryant, Nellie Seaborn and Thelma Washington. She leaves to cherish her memories: her children, Dana George (Terri) of Medford, NY, Shonda Griffin (William) of Shirley, NY, Daryl George of Southampton, NY, Shelise Bowe (Troy) of Bellport, NY; 25 grandchildren, 37 great grandchildren, 11 great, great grandchildren; a host of nieces, nephews, cousins and friends.

Carolyn Marie Parker affectionately known as &#8220;Marie,&#8221; daughter of the late Robert Parker and Fannie Ford Parker, was born on January 9, 1932 in Bridgehampton, New York. She departed this life after a long battle with a terminal... View Obituary & Service Information

The family of Carolyn M. Parker created this Life Tributes page to make it easy to share your memories.

Send flowers to the Parker family.