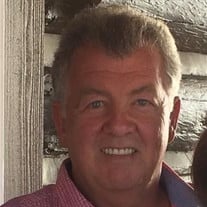 It is easy to reduce a life to the bare facts of the names of the parents, siblings, spouse and children; to when they were born and how long they lived. We owe it to Dennis to give you a fuller picture of who he was so you will remember him as we do, a selfless man who loved his friends and family deeply and who serves as a continuing inspiration to them. Dennis was a man who enjoyed the simple pleasures in life – good company, good food and good conversation, with a background of no music recorded after 1979. If this was greased by a good Coors Light, all the better. Everyone was welcome at his house for the pool in the summer and the Super Bowl in the winter. He made us laugh with his sharp sense of humor and told us exactly what he thought and where he stood but always with respect for others. He was always gracious and had the unique ability to make sure everyone knew how much he valued them without grand gestures or slick words. He embraced the water, it did not matter if it was from his boat, at his pool, or best of all at an all-inclusive family vacation at a beach resort. At home he enjoyed Westerns, so much so that his children learned every line from the Magnificent 7. The Mets were his diversion in the Summer and the Dallas Cowboys in the Fall and Winter. Above all, family was at the center of his life. He adored his children and his greatest joy in life was spending time with them pursuing their far-ranging activities, from go-cart racing to roller hockey. For roller hockey he travelled all over the country, always putting the focus in the right place, on comradery and making new friends, not the competition. His presence at every game instilled confidence; well almost every game, not even the love for his daughter could see him through a soccer game. True to character we knew exactly how he felt about soccer. For us, the old saying that the apple does not fall far from the tree in Dennis’ case is a blessing. His daughter Jennifer is cut from his same cloth. Her easy-going personality and ability to make everyone at ease is a direct reflection of him. With someone who led such a full life it is difficult to pick a single highlight, but unquestionably near the top of his list was getting to see Jennifer achieve her educational and career goals and recently start her own family with Kristian. His ability to make friends and his caring for other people is reflected in his son Keith. Dennis was always impressed by Keith’s ability to schmooze and sell high-end jewelry, while also showing the compassion to help mentor people going through some of the same struggles he has faced. His son Chris is now following in Dennis’ footsteps as an ideal father. The companionship Chris and Dennis shared from go-cart racing, to youth baseball and ultimately to teammates on a championship winning adult softball team has served as the template for the life and relationships he wishes to establish with Kim and their young sons Tristan and Troy. As Jennifer, Keith and Chris became the adults he wished they would become, he looked forward with great anticipation to his next stage in life, becoming a grandfather. Ultimately, he was blessed with three amazing grandchildren, Tristan, Troy and Mackenzie. These past few years his greatest joy was being called Pop-pop by Tristan and Troy. These past couple of months he was thrilled to meet Mackenzie. True to his magnanimous nature, he deferred first dibs on what Mackenzie would call her grandfathers to Kristian’s father for whom Mackenzie is the first grandchild. Although many of us unfortunately did not get to meet his parents Mary and Peter, they created a close-knit loving family that learned to look after one another in good times and bad. His siblings Mona, Peter and Michael and their spouses Joe, Theresa and Gail supported each other through their lives and were always there when needed. Dennis was as much an older brother as an uncle to their children Sharon, Jackie, Dennis, Kristen and Kevin. Dennis’ life began in earnest almost 40 years ago when he met a cute young athletic woman named Kathy Altman at Club Getaway. He knew very quickly that she was the one; a feeling that was only reinforced when he found out she was low maintenance. Kathy had two dates at Club Getaway and Dennis was the clear winner. In keeping with his focus on family, he very quickly included her in his family activities. They married on a day that started very sunny but turned to clouds and rain, which neither dampened the day or the years to follow. They had an easy relationship, knew each other’s needs and wants and deferred to each other’s desires. Though he was definitely a beach vacation guy, he planned a trip to Europe with Kathy that was sadly cancelled by the pandemic last year. Any two people together for decades will inevitably have their differences, but their disagreements were never intense and were quickly forgotten. They complemented each other, Dennis saw the big picture and did not sweat the small stuff while Kathy looked after the details. Though his illness was brief, he did have the opportunity to take stock. He told us he lived a good life that was a great success in all the things that mattered: he had a great marriage; wonderful children and grandchildren; strong relationships with the people he loved; and pursued the things he enjoyed. We should all be so lucky.

It is easy to reduce a life to the bare facts of the names of the parents, siblings, spouse and children; to when they were born and how long they lived. We owe it to Dennis to give you a fuller picture of who he was so you will remember him... View Obituary & Service Information

The family of Dennis Rey created this Life Tributes page to make it easy to share your memories.

It is easy to reduce a life to the bare facts of the names of...

Send flowers to the Rey family.