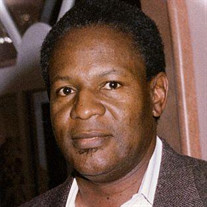 Donald Howie was born November 3, 1943 in Concord, NC to Lester George Howie and Bertina Robinson Howie. He was the first in the family to earn a college degree. During the turbulent 1960s, Don attended Drew University in Madison, NJ, graduating with a Bachelor of Arts in Political Science, with honors, in 1965. He continued his education, earning a Juris Doctor from Yale University in 1971 and a Master of Arts degree in Philosophy from Brandeis University in 1971. While pursuing his education, Don was active in the civil rights movement of the 1960s. Don enjoyed teaching and in 1970, was appointed Chairman of the Black Studies Program at Stonybrook University. He later taught courses in law enforcement at Trenton State University while pursuing graduate studies at Princeton University. As a graduate student, he also taught Philosophy courses to undergraduate students at Princeton. At the same time, Don began a more rigorous pursuit of his legal career. He was admitted to the New Jersey bar in 1975 and the New York bar in 1987. He was also admitted to practice in several higher courts: the US Court of Appeals for the Fourth Circuit (1988) and the US District Court for the Eastern District of New York (1992). Don was well respected in the local community and in 1995, was appointed Assistant Village Justice for the Patchogue Village Court. Don was married to attorney Barbara Howie and together they started their own legal practice in Patchogue, Howie & Howie, Esqs. They served many clients in the New York metropolitan area. In his later years, Don enjoyed traveling with his wife Barbara and spending time with his grandchildren. Don is survived by his wife, Barbara Howie; son, Razi Howie (Lynn); stepdaughter, Melissa Schuchman; four grandchildren - Camus Howie, Bethene Howie, Alyssa Bittrolff, Timothy Bittrolff; brother, Derek Johnson (Susan); sister, Beth Johnson; uncle, Buford Howie; niece, Kira Johnson; nephew, Dillon Johnson; cousins Alfreta Jones, Connie Lewis, Tina Dixon, Jonathan Howie, Mona Williams, Willia Morrison, Wilma Sumler, and a host of other relatives and friends.

Donald Howie was born November 3, 1943 in Concord, NC to Lester George Howie and Bertina Robinson Howie. He was the first in the family to earn a college degree. During the turbulent 1960s, Don attended Drew University in Madison, NJ, graduating... View Obituary & Service Information

The family of Donald Lester Wayne Howie, Esq. created this Life Tributes page to make it easy to share your memories.

Send flowers to the Howie family.