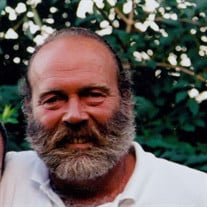 Donald Frank Lechtrecker, 75, passed away peacefully in his sleep at Stony Brook University hospital on May 8, 2022, following his hospitalization for Covid exacerbated respiratory illness. Originally from Patchogue, Donald made Orient, NY his home for the past thirty years. He was predeceased by his parents, Norman and Nan Lechtrecker. Donald is survived by his fiancé and soul-mate Wendy Lomas; brother Gary Lechtrecker, sisters Lynn Cerillo and Kerri Lechtrecker and a daughter Jacqueline “Kat” Cummings. He is also survived by many cousins, nieces and nephews. After graduating from Patchogue High School in 1965 he attended college at Southampton University and Adelphi. He served in the Army during Vietnam and upon his Honorable Discharge his life’s journey took him to 49 states, other countries and a wilderness adventure in Canada. His passion for travel led him to work as a freelance lineman for many years, and his passion for nature led him into the art world, using sand and wood to make creative enhancements. His passion for our natural world led him into literature, as well, where he authored an environmental-themed children’s book. An ardent believer of how we are all connected to one another and our environment, Donald frequently lamented upon man’s overdevelopment of the planet causing a diminished habitat for the animals and the extinction of many animal species. Donald later returned to his true love, the sea, where he enjoyed working for many years as a commercial fisherman. An avid reader, Donald held a keen interest in the universe and cosmos, continually pursuing greater knowledge of our very existence. Most of all, Donald will be remembered by many as an ardent animal lover and another ‘Dr. Dolittle’ for his ability to converse with the animals. He counted many raccoons, squirrels and wild birds as his friends, and they would visit him waiting for him to feed them treats. Donald would do anything to help the animals, including transporting an injured raccoon to a private farm upstate so it would have a better life, or stopping traffic for turtles to safely cross the road. In Donald’s own words, he was “neither charlatan nor rogue.” A memorial service will be held on Saturday, May 21, 2022, from 1:30 pm until 4:30 pm where we will celebrate and remember our beloved Fiancé, Brother, Uncle, Father and Friend. In lieu of flowers, we ask that donations be made to the North Fork Animal Welfare League or any other animal assistance organization.

Donald Frank Lechtrecker, 75, passed away peacefully in his sleep at Stony Brook University hospital on May 8, 2022, following his hospitalization for Covid exacerbated respiratory illness. Originally from Patchogue, Donald made Orient, NY his... View Obituary & Service Information

The family of Donald Lechtrecker created this Life Tributes page to make it easy to share your memories.

Donald Frank Lechtrecker, 75, passed away peacefully in his sleep...

Send flowers to the Lechtrecker family.