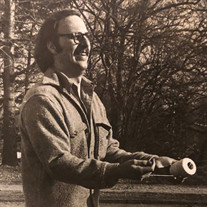 Earl Francis Morris, aged 77, passed away on November 3rd at his home in East Patchogue. Earl was born on December 7th, 1942, in Jamaica, NY, to the late Earl W. Morris and Nina Maria Luigia (Cocco) Morris. He grew up in Hicksville, when Long Island was still largely rural. He had fond memories of hunting with his father for small game on the farmland where the Long Island Expressway is now located. He attended The Darrow School in New Lebanon, New York, where he played football and worked as a reporter for the school paper. He continued his education at C.W. Post College on Long Island, earning a Bachelor’s Degree in Economics and Political Science, with a concentration in English Literature. He touched many lives during his 38-year career with the New York State Department of Labor, where he worked as a reemployment specialist. He felt a deep sense of satisfaction and dedication to his work, and was beloved by long standing colleagues. He was a dear friend to many, and always open for witty banter and conversation. Earl had many passions, including woodworking, landscaping, photography, astronomy, economic and political discourse, target shooting, and ammunition reloading. He was also an avid listener of NPR, which he would always have on the radio as he drove his daughter, Emily, and her friends all over Long Island. He was a great fan of movies, including classic titles, science fiction, and the works of Quentin Tarantino and the Coen Brothers. Earl held a special affinity for the small town of Walton, NY, and loved spending time at the home he designed there, birdwatching, and sitting on his deck, while absorbing the serenity of nature. He is survived by his wife, Patricia E. (Browne) Morris, his daughter Emily Dean and her husband Robert, grandchildren Gavin and Bethany, and daughter Lexia Rowley Owens and grandson Deaton, as well as several nieces and nephews. He was predeceased by his son, Peter Morris, and his sister, Marie E. Labrador. He was a caring and kind person who loved his family very much, and he will be deeply missed by all.

Earl Francis Morris, aged 77, passed away on November 3rd at his home in East Patchogue. Earl was born on December 7th, 1942, in Jamaica, NY, to the late Earl W. Morris and Nina Maria Luigia (Cocco) Morris. He grew up in Hicksville, when Long... View Obituary & Service Information

The family of Earl F. Morris created this Life Tributes page to make it easy to share your memories.

Earl Francis Morris, aged 77, passed away on November 3rd at...

Send flowers to the Morris family.