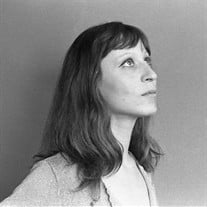 Elda Gentile, AKA Elda Stiletto passed away on August 6th, 2018. She is survived by her son Branch Emerson, her daughter in-law Megan Emerson and her 3 young grandchildren Caleigh, Aidan and Finn. Elda was born on November 7, 1949 to John... View Obituary & Service Information

The family of Elda Rose Gentile created this Life Tributes page to make it easy to share your memories.

Send flowers to the Gentile family.