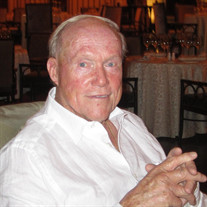 Francis P. Miller, of Brookhaven, passed away on Sunday-November 7th. He was 89 years young. Francis was born on December 26, 1931. He was the fourth of seven children and his family lived in Queens Village and enjoyed a summer bungalow in Mastic Beach. Francis shared many stories about growing up with 5 brothers and 1 sister. Shooting ducks in Zachs Bay, spending summers in Mastic Beach shell fishing in Great South Bay and rowing to what is now Smith Point Beach before there was a bridge. He served his country as a Marine stationed in Italy and then the Middle East. He was blessed when he met Omaira R. Fay. A meeting that occurred because their brothers, Efraim Fay, and the late Peter Miller knew each other. Francis and Omaira were married on April 24, 1954. Omaira, looking ahead, insisted that Francis have a job that provided stability, life-time benefits and a future. So, at Omaira’s urging, Francis began his more than 40-year career with LILCO. Francis and Omaira moved to Brookhaven in 1956 and made their home on Epsom Course to raise their family. A big family. O’Myra, Gail, Mary, Frank, Monica, Teresa, Michele and Jessica. During this time, they moved to Burnett Lane where Francis spent most evenings renovating and improving their home to provide for his growing clan. Some people live to work, Francis worked to live. He loved gardening. He spent his free time visiting nurseries out east and planting all types of trees and shrubs. At one time or another he provided, and helped plant, trees and shrubs for all of his childrens’ yards. They are all living tributes to Francis’ love of the outdoors. He loved the water. After working on his home on a Saturday morning, he loaded Omaira and the kids into the “Tin Boat” for an afternoon on Fire Island. (Francis later traded in the “Tin Boat” for a Herreshoff Sailboat which he loved to sail in Bellport Bay with his wife, kids and by then his grandkids.) After retiring from LILCO Francis took up golf. Nothing gave him more pleasure than sharing an afternoon walking a golf course surrounded by trees and plantings with his son, grandkids, son-in-laws, friends, even his oldest daughter O’Myra – although playing with O’Myra meant cleaning up his language. Francis loved to read. He had a thirst for knowledge. There were few subjects he did not have some knowledge of. Whether it was the latest changes in ocean currents, world politics, or how Monet successfully blended blue into his paintings, Francis always had some information he could share. Francis had a deep abiding love of God and Church. He was forever grateful for the many gifts he received. For a kid who grew up in Queens, born during the Depression, he always said how lucky he was in later years to be able to travel multiple times to Europe, as well as Israel, Egypt, Alaska, St. Lucia with Omaira and some combination of his children. He recognized he was blessed with these trips and vacations and everything God gave him. But deep in his heart he knew God’s greatest gift to him was the love he shared with Omaira and his children. It is this love for his family that Francis passes on to all of us, his children, their spouses, their children and their children’s children. For Francis family was everything. He and Omaira were blessed with 67 years of a beautiful life together, a wonderful marriage. Francis was blessed with 8 children, 22 grandchildren, 7 great grandchildren, with 2 more coming (possibly more on the way?). Francis told us that “You never stop being a parent and as your kids get older it gets harder because they’re grown up.” During his last few months as the cancer took him from us, he was in his own home, constantly surrounded by the love and support of his family, relatives, and friends. Sunday November 7 was a bright, chilly Sunday morning. He kissed Omaira Good Morning and then went to God. He will be missed, but will live on in all of our hearts. The Miller Family requests that donations be made to the St Vincent de Paul Society at Mary Immaculate Church in Bellport.

Francis P. Miller, of Brookhaven, passed away on Sunday-November 7th. He was 89 years young. Francis was born on December 26, 1931. He was the fourth of seven children and his family lived in Queens Village and enjoyed a summer bungalow in... View Obituary & Service Information

The family of Francis P. Miller created this Life Tributes page to make it easy to share your memories.

Francis P. Miller, of Brookhaven, passed away on Sunday-November...

Send flowers to the Miller family.