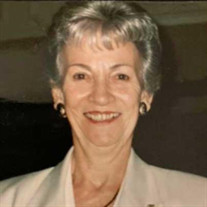 Ginette Paques (French for Easter) was born in Paris on 3/25/1926 to Mr. & Mrs. Andre & Jeanette Paques. Two years later, her sister, Huguette, was born. Ginette would share a strong bond with her sister for the rest of their lives. Her father would suffer a traumatic brain injury as a result of a serious accident, and had to convalesce in a nursing home. At the age of 5, she and her sister were sent to an orphanage as a result of her mother not being able to financially care for them due to the Great Depression. They would both remain under the care of the orphanage, including during the Nazi occupation from 1940 until 1944. Following the end of WWII, having an independent spirit, Ginette decided that she would emigrate to the United States in 1946. Since she did not have a command of the English language at that time, she took a job at Coty Parfumes in Manhattan. Subsequently, in 1947, she was introduced to Roger M. Cuvier, who was an executive in the newly formed Michelin Tire Corp., North America branch. They were married in February of 1948, and nine months later had their first son, Claude Roger. Then, their other son, Daniel Marcel, was born in 1953. Ginette was a wonderful, caring wife & mother who took good care of the family and her Hicksville homestead. Always elegant, even when working in the yard, she decided to take a job at Gertz at Mid-Island Plaza in their “Better Dresses” department in order to help save-up for a 1962 family trip to France. Subsequently, Roger became ill, as a result of battling lung cancer, and died after 18 years of marriage. Afterwards, Ginette decided to go back to work (for 17 years), this time at Michelin Tire Corp. in Lake Success, where Roger had labored for over 19 years. It was at this time that she met Charles W. Wood, a salesman for Triangle Publications (well-known for its popular TV Guide). They fell in love and decided to wed in 1969. She and her beloved Charlie loved and took good care of each other until, ironically, he passed away 18 years later of lung cancer in 1988. Ginette was also a grandmother to Christopher R. Cuvier (born 1975), the son of her eldest son, Claude, and his wife, Barbara A. Cuvier. Subsequently, she became a great-grandmother in 2011 when Christopher and his wife, Stephanie, were blessed with their son, Zachary John. Ginette Wood was a strong, tough, caring and independent woman who loved her family very much, and always wanted to help those around her whenever she could. She was also a very talented artist, who loved to sketch with charcoal or paint with watercolors during the winter seasons, and meticulously care for her gardening and yard work in warmer weather, even cutting her lawn until the age of 83. Unfortunately, she then eventually became legally blind from macular degeneration, and was forced to stop her favorite activities. Though physically strong until the end, she developed chronic depression, and eventual dementia. After living in her Hicksville home for 65 years, she then relocated in 2015 to an assisted living residence in Lake Grove so that she could stay active and make new friends with other seniors her own age. Subsequently, she developed vascular dementia, and started experiencing recurring UTIs and mini-strokes, with several trips to the hospital and rehab center. Sadly, these experiences began to take their toll, and on 10/21/21 she passed away in her sleep, after a life well-lived. Visitation for Mrs. Wood will take place on Tuesday, October 26th from 2 to 4 and 7 to 9 pm at the Robertaccio Funeral Home, Inc. in Patchogue. A Funeral mass will be celebrated on Wednesday, October 27th 10:15 am at St. Frances Cabrini RC Church - Coram. Cremation will take place privately.

Ginette Paques (French for Easter) was born in Paris on 3/25/1926 to Mr. & Mrs. Andre & Jeanette Paques. Two years later, her sister, Huguette, was born. Ginette would share a strong bond with her sister for the rest of their lives. Her father... View Obituary & Service Information

The family of Ginette Wood created this Life Tributes page to make it easy to share your memories.

Send flowers to the Wood family.