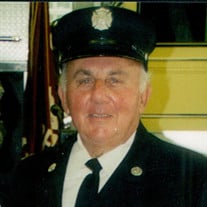 John F. Bosco of East Patchogue, N.Y. died peacefully in his family’s historic home on South Country Road, Friday evening, 12 October 2018. The youngest of five children, John was born to Pasquale “Patsy" Bosco and Raphaela “Fannie” Rutolo on the 5th of July 1931, in the North Brooklyn neighborhood of Williamsburg, New York. John graduated from the Alexander Hamilton Technical and Vocational High School in Crown Heights, Brooklyn in 1949. He attended the New York State Institute of Applied Arts and Sciences in Brooklyn, earning his Associates Degree in Mechanical Drawing, Applied Science and Structural Technology in 1951. John received an honorable discharge from the United States Army in March of 1954 at Fort Dix, New Jersey as a Korean War Veteran. He was employed by his family’s delivery business, the Bosco Duck Company based in East Patchogue. With his father, John delivered the prized live ducks from the eastern Long Island duck farms into the City of New York for the restaurant trade. In the mid 1950’s, the family started Bosco and Sons, a commercial florist endeavor building several greenhouses located in East Patchogue. The family grew traditional flowers used in commercial arrangements popular at the time including carnations, fancy pom-pom chrysanthemums and snapdragons. John started a second business, Fire Island Haulage, partnering with his brother-in-law, Rocky Parisi. Together they provided waste management services to several Fire Island communities including Cherry Grove, Davis Park and Watch Hill and mainland service to the hamlets of Shirley and the Mastics. John and his best friend, Johnny Stephanie joined the Hagerman Fireman Department on January 1, 1953 and together they remained lifelong active members. John volunteered for 67 years also holding department roles as fire police and firehouse chef. John also created a mobile trailer that made delicious treats such as thin crust pizza and real Italian ice. The trailer made many appearances at the department’s social events. In 1951, John met his future wife, Marjorie C. Watjen, “the girl next door” who then lived across the street from the Bosco’s. John met Margie at the “Sugar Bowl” in East Patchogue where she worked as a soda jerk. John and Margie were married on August 25th in 1956. In 1994 and until 2000, John and his son Dominick took over ownership of the historic restaurant Flo’s Luncheonette on Cori Beach in Blue Point, re-naming the landmark “Nick and Flo’s.” In the late 1990’s, John and Margie replaced a beloved “ocean mist green” 1954 Buick Super Convertible — a memorable car that that was stolen from them in early 1960’s. Both were active members of several classic car clubs, Still Cruising Car Club of Long Island, Long Island Buick Club and the Antique Car Club of South Miami. Traveling around the United States together they were featured with the Buick in numerous cars shows, parades and weddings — winning many trophies, press coverage and accolades. Prior to becoming U.S. President, Donald Trump personally invited them with the Buick to a private car show held at his home, Mar-a-Lago in Palm Beach, Florida. Margie taught John how to dance socially from watching Dick Clark’s American Bandstand. They became avid social dancers participating in many 1950’s style sock hop dance competitions — traveling both locally and afar in the Buick. They frequently attended events that often combined 1950’s style dancing with classic car shows and vintage dress. They won at the Lead East in New Jersey — one of the largest 1950’s dance style competitions annually held in the US. Margie and John together created wonderful fun memories for their family and friends at countless social gatherings over the years. They always got the party started — moving the tables to the side to make way for the Jitterbug or the Lindy and more importantly, encouraging everyone to dance. John also had a great passion for hunting and traveling and did so with his sons worldwide including throughout the U. S. (Alaska as well), Canada, South Africa, Italy and China. Notable trophies included a bull moose taken in Newfoundland, Canada and a Greater Kudu in South Africa. Hunting White Tail Deer was the Bosco family tradition that John created for his four sons. In 1961, he purchased his first property in the Catskill Mountains of New York. By 1975, John owned close to 200 acres of land in the Town of Walton, New York. An active participant of the New York State Forest Initiative, he fostered a lifelong passion for hunting, the outdoors and the natural world. That passion is a legacy continued with his sons and grandchildren to this day. John also loved to rais his beef cattle at his home on Long Island. John is predeceased by his oldest brother, PFC Frank C. Bosco (KIA in WWII 1945), his parents Pasquale Bosco and Raphaela Rutolo, his son Dominick “Nicky” L. Bosco, a sister, Angelina, and brothers Dominick and Louis. He is survived his wife, Marjorie of 62 years, and three 3 sons, Patrick and his partner, Holly K. Richardson, John F. Bosco, Jr. and his wife, Susan (Maguire), Louis Bosco and three grandchildren, Nicole Bosco, John Bosco III, and Dominick Bosco Jr. He was loved and will be missed by many nieces, nephews, other family and friends. Visiting hours are to be held on Tuesday, October 16th at the Hagerman Fire Department, 510 Oakdale Avenue in East Patchogue, 2-4 pm and 7-9 pm. A funeral mass will be held at Saint Joseph the Worker Church, 510 Narragansett Avenue, East Patchogue at 10 am with interment to follow at Woodland Cemetery, 100 Station Road in Bellport under the direction of Robertaccio Funeral Home Inc. 85 Medford Avenue Patchogue, NY 11772. website https://www.robertacciofuneralhome.com .

The family of John F. Bosco Sr. created this Life Tributes page to make it easy to share your memories.

Send flowers to the Bosco family.