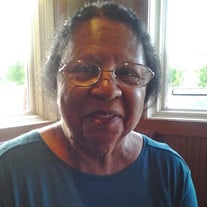 Joyce Anita Carroll was called home on March 17, 2022, at Southside Hospital in Bay Shore, New York. Joyce was born September 7, 1933, at Brookhaven Memorial Hospital in Patchogue, New York to John and Gladys Hunter of the Shinnecock Indian Nation of Southampton, New York. Joyce was the third of six children, she was born and raised on South Street in Patchogue New York, where she resided until meeting the love of her life Richard J.Carroll Sr. in the 1940s. Although he was first and only love, he knew he would always come second to Barry White. Richard and Joyce started their family in Gordon Heights, New York, and eventually found their forever home in Islandia, NY. They strived and succeeded in building a strong foundation for their eight (8) children. After sadly becoming a widow at a young age, Joyce embraced her role as mother, caregiver, nurturer, grandmother, and great-grandmother to the best of her ability. Whether you knew her as Joyce, "Herbie," "Julie" or "Mother Hen", her love for her family was unmeasurable. Joyce was known for her love for all animals, especially her cats. No stray animal that came near her home went unfed. Joyce always saw the good in people, a trait to be admired. Alongside her late daughter and partner in crime Linda, Joyce loved driving around looking for garage sales. She also enjoyed traveling and shopping. Joyce leaves behind her brother John Hunter, sister Lois Hunter, daughters Maria Arnold (late Cola Arnold), Cathy Carroll, Susan Carroll (Darnell Morgan), Dr. Dawn Carroll, Lisa Burrows (Ronald Burrows), and her son Tony Carroll. She was predeceased by her oldest daughter Linda McCollum (Alonzo McCollum) and oldest son Richard J. Carroll Jr. She also leaves behind a host of grandchildren, great-grandchildren, nieces, nephews, cousins, and friends.

The family of Joyce Anita Carroll created this Life Tributes page to make it easy to share your memories.

Send flowers to the Carroll family.