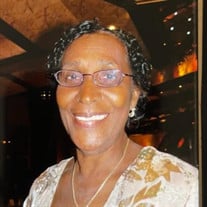 Lilliane Clairine Pantophlet, known to many as “Moms”, departed her loving family and friends to be with the Lord on Monday, April 18, 2022 at Peconic Bay-Northwell Hospital in Riverhead, New York. She was 81 years old. Lilliane was born on August 12, 1940, to Henry Adolphe and Hilda Daniel Violenes in St. Martin, French Antilles as the youngest of nine children. Lilliane was married to Lestia Albert Pantophlet on November 28, 1956, at only 16 years old, in Curacao, Netherlands Antilles. She spent time in St. Martin/St. Maarten, St. Kitts, Curaçao, Trinidad, Surinam and finally settled in the USA in November 1978. Lilliane had nine children; her older 6 kids were born in Curacao and the youngest 3 were born in Surinam (Dutch Guyana). Although in her later years she retired back to St. Maarten, she spent time traveling between her kids’ homes throughout the US, her primary residence, while in the US was Riverhead, New York. Lilliane was an impeccable homemaker and for many years a housekeeper to some families on Eastern Long Island. She is survived by: 9 children: Albert, Glendon, Kenneth, Roland, Reginald, Marcia, Tyrone, Justin, and Rodrique 8 Grandchildren: Ashley, Lilliane, Joshua, Mason, Sarah, MiKaiLing, Jaden and Aaron 2 Great Grandchildren: Ryan and Haley Daughters-in-Law: Theresa, Amy and Karen Sisters: Lucia, Dots and Cynthia In-Laws: Dennis and Mulberry Countless nieces and nephews, family and friends She was preceded in death by: her parents, her husband Albert, brothers Dolphito, Raphael, Willie and sisters Alice and Clem In lieu of flowers, financial donations can be made to the family by Venmo via account: @Kenneth-Pantophlet

Lilliane Clairine Pantophlet, known to many as &#8220;Moms&#8221;, departed her loving family and friends to be with the Lord on Monday, April 18, 2022 at Peconic Bay-Northwell Hospital in Riverhead, New York. She was 81 years old. Lilliane... View Obituary & Service Information

The family of Lilliane Pantophlet created this Life Tributes page to make it easy to share your memories.

Send flowers to the Pantophlet family.