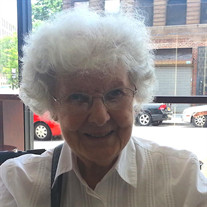 Marion Johnson, the former Marion Walsh, died on August 12th at Brooklyn Methodist Hospital after a brief illness. She was 92. Marion was born in Brooklyn, the child of Thomas Walsh and Anna Gebhardt Walsh. She was the only girl amidst six brothers: James, Francis, Eugene, Robert, Edward, and Raymond. When she was six years old, her father, a taxi driver in Manhattan, decided to move the family to “the country,” where he drove a truck delivering produce from the farms of Long Island. He moved the family first to Eastport, then Center Moriches, before finally settling in Patchogue, where Marion attended St. Francis de Sales Catholic Elementary School, eventually going on to graduate from Patchogue High School in 1944. Marion never quite lost her connection to New York City, however, and during her teenage years was a bobby-soxer frequenting, with her city cousins, the Paramount Theater in Times Square to see Frank Sinatra, Martin and Lewis, and the other famous performers of the day. Soon after her high school graduation, Marion met Loy Johnson, a soldier from Georgia who was stationed at nearby Camp Upton, where Marion had gotten a clerical job. They didn’t meet at the army base, however, but rather at the Patchogue Roller Skating Palace on Railroad Avenue (which later became the Knights of Columbus Hall). In an oral history taken by her son, Dennis, decades later, Marion would note that while she was an avid skater, Loy had been “dragged in” by a friend and never put on skates. “That wasn’t something he would do,” she explained. The two married in 1945. When Loy returned from the war, the couple moved to Georgia for several years before returning to Patchogue, where they built a house on Sharp Street, the outermost edges of the village at the time. They had three sons together: William, Thomas, and Dennis. While Loy became a welder in the aerospace factories then proliferating on Long Island, Marion worked multiple jobs: As well as being a homemaker, she worked for many years in the cafeteria services of the Patchogue Medford School District, and after that returned to clerical work, this time at the American Red Cross office on North Ocean Avenue. Besides those occupations, however, her son Dennis noted that she regularly held down jobs she wasn’t paid for, volunteering throughout her life for numerous worthy causes. He recalled bringing food with her to elderly shut-ins, her volunteering at her local hospitals and her church, and, during her retirement in Florida, at such organizations as Give Kids the World, a resort accommodation for children with fatal illnesses. “She was always helping somebody,” he said. “She was pretty relentless about that.” Marion died in Brooklyn, where she had gone to live with Dennis and his wife, Valerie. She is predeceased by her husband Loy, to whom she was married for 66 years, until his death; and by her eldest son, William. She is survived by her brother Raymond; her son Thomas and his wife Patricia; her son Dennis and his wife Valerie; the widow of her son William, Karen Lee; her grandchildren Brett Johnson, Brie Johnson, Elisabeth Cronin, and Sarah Kurtzman; and four great-grandchildren. Services for Marion include a 10:00 am mass at Saint Francis de Sales Church in Patchogue on August 18th, followed by a wake at the Robertaccio Funeral Home from noon until 2:00 pm. She will be buried in Demorest, Georgia, beside her husband. In lieu of flowers, and in memory of Marion’s constant reading to her children, the family requests donations to the Reading Is Fundamental literacy program for children. Donations can be made by calling 1 (877) RIF-READ (743-7323), or going to the donation page on its website: https://www.rif.org

Marion Johnson, the former Marion Walsh, died on August 12th at Brooklyn Methodist Hospital after a brief illness. She was 92. Marion was born in Brooklyn, the child of Thomas Walsh and Anna Gebhardt Walsh. She was the only girl amidst six... View Obituary & Service Information

The family of Marion Johnson created this Life Tributes page to make it easy to share your memories.

Send flowers to the Johnson family.