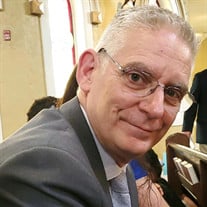 Brother, uncle, father, grandfather passed away peacefully at his home in Medford, NY the morning of September 15, 2021. He is survived by his children Brigitte Santiago and Danielle Betz. Michael is also survived by his grandchildren Brien Santiago, Thomas Betz, Brendan Santiago and Jacob Betz and by his four brothers and two sisters, as well as many nieces, nephews and godchildren. He is preceded in death by his wife Regina and his parents Peter and Dolores Spoleti. Michael (aka Mike, Angelo, Ang or Sonny) was born in Queens, NY. He was raised and went to school in Massapequa Park with his large family of nine. In 1975, he married his first true love and soulmate, Regina and raised two children together. Michael and Regina built their lives together with their children in Mastic, NY. Michael moved to Medford, NY in 2005 where he resided until his passing. Michael was a produce manager for Pathmark for over 30 years. For the past 6 years he was a retail service merchandiser part time to keep busy during the days. Michael had a great love for music; especially any music from his favorite artist, Diana Ross. He also enjoyed shopping (especially at Costco), watching tv, going on family vacations and most of all spending time with his family; more specifically with his four grandsons. The greatest joy in Michael's life was his grandsons and being there for literally everything in their lives; every single school event (first days of school, band and chorus concerts, award ceremonies, field days and the list goes on), sports events (soccer and baseball games), every single birthday or holiday, along with many other ordinary days in between! Michael was one of the most kind, gentle souls with a great sense of humor and would be willing to drop whatever he was doing to help out if help was needed. He was a great big brother, the best father and father-in-law, as well as the most incredible grandfather. Services being held are for family and close friends only. Burial will be at Holy Sepulchre Cemetery in Coram, NY.

Brother, uncle, father, grandfather passed away peacefully at his home in Medford, NY the morning of September 15, 2021. He is survived by his children Brigitte Santiago and Danielle Betz. Michael is also survived by his grandchildren Brien... View Obituary & Service Information

The family of Michael A. Spoleti "Sonny" created this Life Tributes page to make it easy to share your memories.

Send flowers to the Spoleti family.