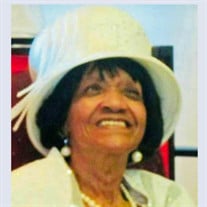 Obituary of Mother Ada M. Purnell Jefferson First Lady of Jefferson Temple Church of God in Christ Ada M. Purnell Jefferson, a long-time resident of the state of New York, was born on March 12, 1936, in Dillon, South Carolina to the union of Joseph Purnell Sr. and Clara Purnell and raised in Goldsborough North Carolina. She was married December 16, 1953 and celebrated 67 years of marriage to Bishop Ralph Livingston Jefferson. They were the proud parents of Jerry, Joseph, Theresa, Victoria, Ralphael, and Loretta. Mother Jefferson received her formal education at Dillard High School in the Wayne County school system in Goldsborough North Carolina and was admired by her peers. After meeting and marrying the love of her life in Goldsboro NC, her new journey began when she relocated with her husband Ralph Livingston Jefferson to his hometown of Southampton, NY. At a young age Mother Ada M. Purnell Jefferson knew that one day she would give her life to Christ. After hearing a song called, “Too Close to Heaven” (her favorite song,) she was saved and filled with the Holy Ghost in 1957 under the leadership of Dr. Joseph Arnold King. She held various positions in the church since accepting Christ during her membership at King’s Chapel Church of God in Christ, Southampton, NY including choir member. She also served as the District Mother in the Progressive District appointed by the late Superintendent D. H. Green. She worked alongside her husband upon his Call to Ministry in February 1959 under the late Bishop O.M. Kelly. Her service to ministry continued with him as he founded Jefferson Chapel Church of God in Christ in Port Jefferson, NY in July 1964 with their five small children. With a fast-growing congregation and after several moves to meet the demands of expansion, Pastor Jefferson with his wife by his side, and congregation moved to Bellport, NY. There, they built and completed Jefferson Temple Church of God in Christ in 1975. This church sets on 2 acres of land and stands as a beacon light to the community. This accomplishment did not come without much contribution from this First Lady. She stood in solidarity with her husband and was very instrumental in the completion of the purchase of Jefferson Temple. Mother Ada M. Purnell Jefferson was wise in networking even in the marketplace and it was through her that a wealthy woman made donations to complete the building of the Temple. Mother Jefferson’s commitment did not cease with that donation. There were countless days of working a full-time job for 8 hours per day that she would return to her home only to fix her plate and eat it on her way to Bellport to work on the building. Many saw the hats on a Sunday, but during the week she was found helping to put stucco on the walls and working to provide the funds to purchase all of the lights and bricks to complete the steps at the facing of the church. Mother Ada M. Purnell Jefferson was passionate about souls coming to Christ. She would get down on her knees to tarry with the saints at the altar ensuring they would come through with the Holy Ghost. She would tell them, “Hold on to Him! Don’t let go!” Each year, she would celebrate the graduates of the Church by hosting a graduation dinner party giving each a graduation gift. She also enjoyed hosting: King and Queen Contests for the children, Rainbow Tea, Green Leaf Tea, and Represent your Home State Day. Mother Ada M. Purnell Jefferson loved to serve in the ministry and did so with a smile. Throughout her time of ministry as First Lady at Jefferson Temple, she was honored to serve in the following capacity: Choir President, Mother’s Board President, Trustee Board Member, Floral Club Member, Women’s Day President, Pastor, Ministers & Deacons Wives Circle President, Missionary, and Pulpit Committee President. May the works she has done speak for her. Mother Ada M. Purnell Jefferson was the epitome of a wife, mother, First Lady, and a Bishops wife. Although she fulfilled many roles in the Church, she will always be remembered for her warm and gentle spirit. Her radiant smile will be etched in our hearts and memories forever. Mother Ada M. Purnell Jefferson was preceded in death by her parents: Joseph Purnell Sr. and Clara Purnell Leake, loving husband of 67 years Bishop Ralph Livingston Jefferson, one son Jerry Purnell, three sisters: Brenda Leak, Dorothy Jean White, and Maryanne Bolden, two brothers: Jackie Leake, and Joseph Purnell Jr. She leaves to cherish and celebrate her life her five children: Deacon Joseph Jefferson (Susan) of Amityville, NY, District Missionary Theresa Jefferson Partlow (Paul) of East Patchogue, NY, Evangelist Victoria Jefferson of Bellport, Superintendent Ralphael Jefferson (Laurie) of Amityville, NY and Elder Loretta Jefferson of Bellport, NY; 19 grandchildren, 25 great grandchildren and 4 great-great grandchildren numbering five living generations, three sisters in- law: Mother Dorothy Shaw (Frank) Bronx, NY, Supervisor Marion Vickers of Hempstead, NY, and Carolyn Leake of Benson North Carolina, a host of nephews, nieces, Godchildren and loved ones, Jefferson Temple COGIC Bellport, NY and Western Canada Ecclesiastical Jurisdiction Church of God in Christ.

The family of First Lady Mother Ada Mae Jefferson created this Life Tributes page to make it easy to share your memories.

Send flowers to the Jefferson family.