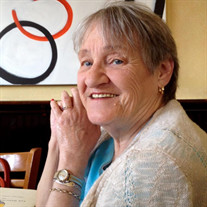 Nancy Irene Cherney Romard Fuoco Nancy Romard Fuoco, 82, passed away on Sunday February 20, 2022. Nancy raised 5 children: Donald (Lorraine) Romard, Regina (Mark) Henken, Rhonda (James) Maier, Terri Candela, Ralph (Ashley) Fuoco Jr. She was the beloved “Gram” to eight grandchildren: Cristel, Steven, Lauren, Julie, Christian, Donald, Tiffany, and David. She also adored her eight great grandchildren, with one on the way: Sydney, Christian, Liam, Jaxon, Aiden, Victor, Tyler, and Teagan. Nancy was born on April 27, 1939 in Patchogue, New York and was the daughter of Francis and Susan Cherney. She was the youngest of nine children who all pre-deceased her: John, William, Alice, Frances, Le Roy, Henry, James, and Matthew. She lived most of her life in Patchogue and Bellport, New York. Married to Donald Romard on September 9, 1956. She took her first airplane to the territory of Alaska where Don was stationed in Anchorage with the US Air Force. Their first Son Donald was born there. Subsequently they moved to Buzzards Bay, Massachusetts. Regina and Rhonda were born there. Donald was killed in a car accident on April 2, 1962. She married Ralph Fuoco on December 27, 1967. Terri and Ralph jr. were born in Patchogue, New York. Nancy enjoyed many years of retirement after her years as a School Bus driver. She loved to spend time with family and her many friends. She enjoyed many opportunities to travel. Nancy was a devout Catholic her entire life. She served as a Lector and Eucharistic Minister for over 35 years. She brought communion to the home bound, served in prison ministries, and bereavement consolation ministries. For 10 years she also led the weekly Gate of Heaven prayer group. Public viewing will be held on Thursday, February 24th from 2-4 pm and 7-9 pm at Robertaccio Funeral Home. Mass of Christian Burial will be Friday, February 25th at 10:45 am at Saint Joseph the Worker Catholic Church at 510 Narragansett Ave, East Patchogue, NY. Interment will take place at Union Cemetery Middle Country Rd, Middle Island, NY In lieu of flowers, those who wish to remember Nancy in a special way may send a gift to Saint Joseph the Worker Catholic Church or the American Cancer Society.

The family of Nancy R. Fuoco created this Life Tributes page to make it easy to share your memories.

Send flowers to the Fuoco family.