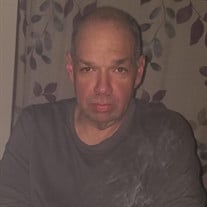 Nicholas F. Scopa IV of Selden passed unexpectedly on May 1st from injuries incurred from an auto accident. He had just celebrated his 51st birthday on April 23. He was born in 1971 in Port Jefferson. Nicholas is predeceased by his biological father Nicholas Scopa, his maternal grandfather Alfonso Martines, his Aunts Victoria Martines and Patricia Virgillio, his Uncle Frances Martines, and his Uncle Edward Martines, who cared deeply for him. Nicholas is survived by his half brother Nevin Festger, ( he was so happy to finally have a brother), his half sister Denise Gedick, his mother Clelia Festger, his stepfather John Festger, whom he called Dad. Nicholas is also survived by his Uncle Daniel Martines, Aunt Ethel-ann Martines, Aunt Rosemarie Donnelly, Uncle Alfonso Martines, Uncle Anthony Martines, and Aunt Laura Mackey. He is also survived by his best friend Christopher Francis, whom he loved and considered to be his brother. Nicholas is also survived by his girlfriend Deborah Reingold, whom he loved dearly. Nicholas grew up around all his maternal aunts, uncles and grandfather. He stayed with them often as a young child and often visited with them as he grew older. When his aunt Laura slept in his room when he was very young. He would toss his bottle at her to wake her up. He thought it was hilariously, but she didn't enjoy getting bopped in the head. Nicholas loved animals. He had several dogs in his life. But now he has 2 cats that he rescued from a bad relationship. Mylo had gotten out of the house one day, and when he returned, he had another cat with him. He thought Mylo found himself a girlfriend so he called the cat Molly. Later he learned Molly was a male. We called him Sid Vicious because he was a bit nasty. But over time has mellowed. The cats slept with him. Sadly Mylo dislocated his jaw during one of the daily 2 AM romps. Both cats would bang into everything in the bedroom. We could hear Nicholas telling them to go to sleep. Nicholas had to put Mylo down this past April. It deeply saddened him. Nicholas was very friendly to everyone he came across. He would strike up a conversation with just about everyone he happened upon. He helped out anyone that needed help, even if he didn't know them. He had a huge heart and was very caring and giving. Nicholas could be very humorous. His sense of humor was a bit on the dry side sometimes. He was funny and quick witted. We would laughingly call him a “smart ass” with some of the comments he made. Most of his family thought of him as a kid in a man's body. Nicholas had a passion for vehicles. Most photos he took were of various vehicles his friends or he owned. He, himself probably owned and then sold a vehicle every 2 to 3 years. Nicholas leaves a huge hole in the hearts of his family and friends who were always entertained by his stories. He will be missed more than he could ever believe. Services will be held at Robertaccio Funeral Home in Patchogue on Wednesday, May 11th. Visiting hours 2 to 4 PM., and 7 to 9 PM.

Nicholas F. Scopa IV of Selden passed unexpectedly on May 1st from injuries incurred from an auto accident. He had just celebrated his 51st birthday on April 23. He was born in 1971 in Port Jefferson. Nicholas is predeceased by his biological... View Obituary & Service Information

The family of Nicholas F. Scopa IV created this Life Tributes page to make it easy to share your memories.

Send flowers to the Scopa family.