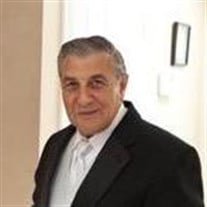 Nicolo Cottone. Survived by his wife Anna Marie Cottone, His Sons Benny Cottone, John Cannata, and his Daughter Kathleen Fink He was the oldest of 4, the remaining siblings are, Josephine Grisafi, Joseph Cottone, Paul Cottone Grandchildren in age order, Rosario Cannata, Alessia Cannata, Lucca Cottone, Vincent cottone Nicolo Cottone was born on December 16th, 1944 in Caltabellotta, Sicily and came to the United states at the age of 18. He met the love of his life when he was 33 and did everything he could to provide for his family. He was a carpenter/handyman/kitchen cabinetmaker, for various companies over the years and the last 10 years of his working career he worked for EDO Corporation in Bohemia as a maintenance man. Nicolo loved to go crabbing, and enjoyed going to Montauk point to pick snails (escargot) right out of the water. He loved making a garden every year, he truly devoted his time from April to October on his garden. It was a small footprint in his yard, but his garden produced bushels of tomatoes and zucchini and so many other vegetables. Every September my father would make sauce with all the bushels of tomatoes and bottle it so we had sauce for the whole year and he would give it out to his friends and family. Nicolo is survived by his wife, Anna Marie Cottone, his children, Benny Cottone, John Cannata and Kathleen Fink. He was the oldest of 4; survived by his siblings, Josephine Grisafi, Joseph Cottone and Paul Cottone. He also leaves his cherished grandchildren; Rosario Cannata, Alessia Cannata, Lucca Cottone and Vincent Cottone. Nicolo was a humble, simple man but most of all a man of God. He didn't own much or anything flashy. But one thing that did stand out was the love that he had for his family. Nicolo will be greatly missed but we know he is rejoicing and whistling with the lord!

The family of Nicolo Cottone created this Life Tributes page to make it easy to share your memories.

Nicolo Cottone.
Survived by his wife Anna Marie Cottone,
His...

Send flowers to the Cottone family.