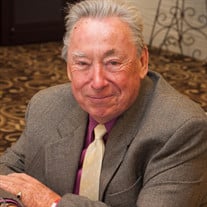 Richard John Mato, 77, passed away peacefully at home surrounded by his loving family on December 4, 2018. Richard was born October 16, 1941 in Manhattan, NY to William and Ellen Mato. He was a Hicksville High School graduate in 1959. He went on to pursue his love for flying and attended the Aviation Center at Farmingdale State College, in Farmingdale NY. After graduating from college, he joined the Navy and became a Navy pilot. Richard then worked as a great salesman for most of his life. Beloved husband of wife Dorothy Louise Mato. Loving father of his children Richard Mato, Maureen Jeffries and husband Gilbert, John Mato, and the late James Mato, Step children Janice Irolla, Dominick Chiuchiolo and wife Nicole, Anne Moston and husband Evan and Jessica Cortez and husband Chris. Cherished Grandfather of Jamie, Christian, Brodie, Avery, Spencer, Nathaniel, Julian, Nicole, Zachery, Kaden, Michael, Dominick, Taylor, Derek, Lily and CJ. Caring brother of his siblings Bill Mato and wife Fran, Theresa Pascucci and husband Tom. Richard had a passion for so many things in life especially his love for music where he expressed himself in singing and dancing. He was a proud member of the Whalers Barbershop chorus on Long Island and the Suncoast Barbershop chorus in Florida. Richard loved to ballroom dance with his wife Dorothy as they attended many venues including the Gulf Port Casino in Florida. Richard had an expertise for finding treasures to buy and sell. He was a real people person and made many cherished friends along the way. Richard was knowledgable in many areas and shared that with his children and grandchildren. He always encouraged them to use their talents and abilities. His family adored him as he spent a lot of time sharing stories, food and fine wine. He was a very proud patriotic veteran who started out as a young scout. He loved our country and he honored the American Flag and all it stood for. He was proud of his Irish heritage and was blessed a couple months ago as he was able to take his last trip to Ireland with his brother Bill. Richard and his wife Dorothy had a genuine love for each other and anyone that knew them would always say how they really were soulmates and had found true love. They made their mark in this world together and always enjoyed life to the fullest! He had a very strong faith in God and was comforted by this in his last days. Richard John Mato lived a joyous life. He kept the “whole world singing” and the world has lost a great and loving man!

Richard John Mato, 77, passed away peacefully at home surrounded by his loving family on December 4, 2018. Richard was born October 16, 1941 in Manhattan, NY to William and Ellen Mato. He was a Hicksville High School graduate in 1959. He went... View Obituary & Service Information

The family of Richard John Mato created this Life Tributes page to make it easy to share your memories.

Send flowers to the Mato family.