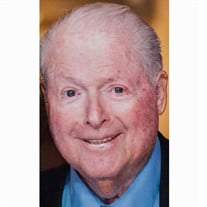 Robert Deck of The Villages, Florida previously of Medford, New York passed away peacefully at the age of 82, after a courageous battle with Merkel Cell Carcinoma and End Stage Renal Failure. Bob was born in Brooklyn, New York and grew up in the Lower Eastside of New York City. He met the love of his life, Claire at the age of 13. They married at 18 and were blissfully married for nearly 65 years and raised 3 treasured children. Bob joined the United States Air Force in August of 1956. He was honorably discharged as an Airman Second Class in March of 1961. He worked for Pan American Airlines for 30 plus years. He and Claire retired to The Villages, Florida in 2004 where they enjoyed many activities such as golfing (he received a Hole In One Certificate), swimming / walking in the pool and playing cards with his neighbors. He belonged to The Villages NY Yankee Club, Rifle Club and Fishing Club. Bob enjoyed drawing and painting and was a proud member of the North Lake Presbyterian Church where he drew many scenic pictures for the church bulletin. Throughout his life, he was a passionate NY sports fan, rooting for the NY Yankees, Giants and Rangers. Bob and Claire enjoyed watching their favorite soap opera, General Hospital, together every day. Bob was preceded in death by his parents Lawrence and Lena Deck and brother Kenneth Deck. Bob was a loving husband, father, grandfather, and great grandfather. He is survived by his adoring wife Claire and three children. Anita (Kevin),Elena (Matthew),Bob (Jessica) Grandchildren Ryan (MaryAnn) Katelyn (George), Danielle (Pasquale), Timmy (Heather) Brooke (Darren), five great grandchildren Gianluca, Eliana, Roman, Makenzie, and Addison who affectionately called him "Papa D". Bob is survived by his brothers Tom (Toni) and Larry (Jeanette - deceased) and sister Madeline (Kevin) as well as his sister-in-law Maureen along with numerous nieces and nephews. Bob will be greatly missed by all those who loved him. “In God We Trust". In Lieu of Flowers, Donations may be made to: *The American Kidney Fund, Rockville, MD *Wounded Warrior Family Support Omaha, Nebraska *Cancer Research Institute (NYC) *Guide Dog Foundation For The Blind Smithtown, NY Visitation will be held at Robertaccio Funeral Home in Patchogue, NY. Please check back for updated service times.

Robert Deck of The Villages, Florida previously of Medford, New York passed away peacefully at the age of 82, after a courageous battle with Merkel Cell Carcinoma and End Stage Renal Failure. Bob was born in Brooklyn, New York and grew up in... View Obituary & Service Information

The family of Robert L. Deck created this Life Tributes page to make it easy to share your memories.

Robert Deck of The Villages, Florida previously of Medford, New...

Send flowers to the Deck family.