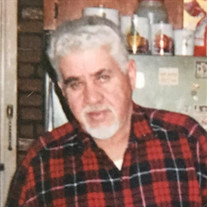 Roger Richard Hart Sr., Son of the late William and Bertha Hart was born on November 22, 1934, in Setauket, NY. He Passed away peacefully on Friday January 11, 2019 at St. Charles Hospital in Port Jefferson, NY. Roger was known to family and friends as (Buzz) growing up in Setauket, NY. When he met and married Lenora Payne and out of that union they had five children. Buzz continued to live in Setauket and until he moved his family to Bellport, NY where he began working for Suffolk County Department of Public Works, maintaining the Suffolk county Highways until his retirement. When Buzz retired from the Department of Public Works he moved to Port Jefferson Station, NY where he enjoyed several hobbies gardening, fishing, boating, setting up lobster pots in the Port Jefferson sound, there he was in his element. Buzzed loved working on his boats and working around the house just fixing whatever he could. He enjoyed going for drives and finding things on the side of the road to pick up and bring home to fix. All that knew him would say Buzz was a man of few words until he got that “drink,” then after that you could be sure he would have a lot to say and even be willing to challenge you if you beg to differ. He was known as a “hell raiser “in his younger and middle years. As time went on he had quieted down and would enjoy he drinks at home. His favorite saying was he was going to the “Bone Yard” he can rest now that is has made that transition. Buzz leaves to cherished memories his Brother Raymond Hart, Lenora Johnson and Children, Roger R. Hart Jr., Lenora Hart, Richard Hart, Victoria Williams and Walter Hart. Grand Children Lashawn A. Watkins, Gary M. Watkins-Ashley Watkins, Stanley L. Gray, Latara L. Parker, Vonnie Williams, Torek Williams, Cheree Williams and Jamir Williams, Roger R. Hart Jr II and Cash Alexander Hart, Serenity Nzinga Hart and a host of Great grands, Nieces, Nephews, Cousins, Family and Friends.

Roger Richard Hart Sr., Son of the late William and Bertha Hart was born on November 22, 1934, in Setauket, NY. He Passed away peacefully on Friday January 11, 2019 at St. Charles Hospital in Port Jefferson, NY. Roger was known to family and... View Obituary & Service Information

The family of Roger R. Hart Sr. created this Life Tributes page to make it easy to share your memories.

Send flowers to the Hart family.