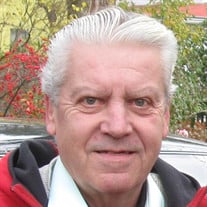 CACIOPPO - Stephen J., lifelong resident of Medford, New York, passed away on Friday, April 13th, 2018. He was 70 years old. Stephen was the beloved son of the late Anna and Joseph Cacioppo, brother of JoAnn Cacioppo Maroney and Dennis Cacioppo and the late John R. Cacioppo who was killed in Vietnam in 1967. The American Legion in Medford, "The American Legion John R. Cacioppo Post 1848" is named in honor of Steve's brother, John. Stephen had numerous nephews and one niece. His nephews include Jonathan Maroney (Amy), Jason Maroney (Ashley), Lucas Maroney (Lizz), Gregg Cacioppo (Roseida) and David Cacioppo (Hillary). His niece, Mary Ann Maroney, pre-deceased him. He is also survived by his first cousin, Rick Gorski, of Medford and his brother-in-law, Paul Maroney of Doylestown, Pennsylvania. His sister-in-law, Lori Cacioppo, pre-deceased him. His half-brother, George Cacioppo also pre-deceased him. Steve spent his life in the house where he grew up. He loved Medford. Medford was "home", his "comfort zone". Just like in "Cheers", he knew everybody and they knew him. He was a fixture in the community and he had an amazing memory about anything "Medford". Steve graduated from Patchogue High School and attended Suffolk County Community College. He had his own landscaping business for many years and even at age 70 was still doing odd jobs for some of his old customers. Steve could talk to anyone about anything and was a real "people" person. Everyone loved Steve and many have described him as a "salt of the earth" kind of guy. He had a good heart and a sharp mind. He was a "walking encyclopedia" of trivia, especially plants! He never forgot a birthday and you could always count on hearing from him with an enthusiastic “Happy Birthday"! Steve loved to cook and he and cousin Rick would do Sunday dinners together on a regular basis. His favorite sport was baseball and he played quite a lot in his younger days. He also enjoyed fishing, playing cards or simply "hanging out". There will be a celebration of Stephen’s life on Friday, April 20th, from 7pm to 9pm, at Robertaccio Funeral Home in Patchogue, NY. On Saturday, April 21st, the family will receive friends at 10am at Robertaccio's, followed by a short service at 10:30am and Christian burial at Holy Sepluchre Cemetery in Coram. In lieu of flowers,please make a donation in Stephen's name to your favorite charity.

The family of Stephen J. Cacioppo created this Life Tributes page to make it easy to share your memories.

Send flowers to the Cacioppo family.