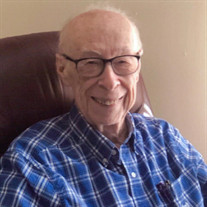 Theodore Steven Perzeszty (Ted, Tibby, Teddy) 93, of Holbrook, NY, passed peacefully on April 18, 2022 at 1:25am. He is survived by his wife, Pat Welch-Perzeszty, his daughters Anne McManus (Bill), Sue Silver and Lynn Perzeszty, stepsons Matthew Welch (Martha) and Michael Welch, 7 grandchildren and 2 great-grandchildren. Ted served our country proudly in the Korean War, traveled the world during that time and in later years with Pat. He could always be counted on for a silly "dad joke," a pun or an email with "stuff" in the subject line. He was an avid videographer and photographer and could often be found in front of his computer, editing all the family pictures that he so lovingly catalogued onto DVD's. He could fix anything mechanical and never went anywhere without his pocket protector containing a pen, pencil and a small screwdriver. Ted had many friends and was beloved by all - he'll be terribly missed. The wonderful "Mr. Fix-it" has left us to our own devices. A memorial service will be held on Friday, April 22 at 10am at Robertaccio Funeral Home, 85 Medford Ave. (Rt. 112), Patchogue, NY (631-475-7000). Interment of ashes will immediately follow at Long Island National Cemetery, 2040 Wellwood Avenue Farmingdale, NY 11735. In lieu of flowers, the family asks that you make a donation in Ted's name to either the American Heart Association or the Red Cross for Ukrainian Relief. To donate: American Heart Association PO Box 840692, Dallas, TX 75284-0692 or American Red Cross/Ukraine Relief PO Box 37839 Boone, IA 50037-0839

The family of Theodore S. Perzeszty created this Life Tributes page to make it easy to share your memories.

Send flowers to the Perzeszty family.