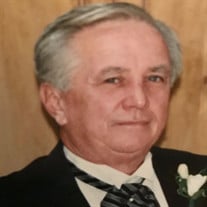 Thomas Patrick Anderson, 80, of Coram, New York, passed away November 30, 2019 surrounded by his loving family. Mr. Anderson was born July 16, 1939, in New York City to Dorothy Harris and Lee Anderson. He attended Islip High School and continued his education at the University of Miami. He proudly served in the United States Army, stationed at Fort Knox from 1963 to 1965. Golf and his grandchildren were his great passion. He was blessed to have been an incredible athlete playing Baseball, Football, Basketball and Golf. He was voted baseball player of the year beating out Carl Yastrzemski for the award that year. Offered two full scholarships to both Notre Dame and the University of Miami he chose Miami because he was able to study business there. His first choice was Notre Dame but they said he had to be a Physical Education Major and that was not what he wanted to study. After the Army he worked hard long hours as bricklayer and he then went on to become Government Bond Broker on Wall Street. He was a partner at Chapdelaine and Company and this was his life for 40 plus years. Dad was loved by many and treated everyone equally. He was humble and kind and never forgot where he came from. The oldest of ten he always worried and took care of his family. He loved his job and everyone he worked with. He enjoyed watching and playing sports, especially watching and cheering for his four grandchildren. Whenever they were playing he was there on the sideline or calling on the phone to see how they were performing and what the score was. He was a very proud husband, father, and grandfather. He is survived by his loving wife of 58 years, Elizabeth Flanagan and his beloved daughters, Kellie Anderson, Erin and Michael Katzman, and Elizabeth and John Merschoff of Long Island; grandchildren Thomas and Claire Cituk, and Riley and Aidan Katzman. His Brothers, Lee, Michael, and Roy and his sisters, Donna, Debra, Denise and Tracey. He was preceded in death by his parents, Dorothy and Lee, his brothers Harry and Robert, and his sister Patricia and his infant daughter, Deirdre. Calling hours are on December 3, from 2 -4 and 7-9 pm at the Robertaccio Funeral Home, 85 Medford Avenue, Patchogue, New York. The funeral will be held on December 4 at 10 a.m. at The Chapel at St. Charles Hospital, Infant Jesus Chapel, 200 Belle Terre Road, Port Jefferson, New York. There will be a gathering at 1:30 p.m. after the burial at Pines Grove Inn, 1 1st Street, East Patchogue, New York. In lieu of flowers we ask that you make donations to the Lustgarten Foundation in memory of Thomas Patrick Anderson. To donate, please visit: http://support.pancan.org/site/TR/DIY/DIYTeamraisers?team_id=24770&pg=team&fr_id=1081

The family of Thomas Patrick Anderson created this Life Tributes page to make it easy to share your memories.

Send flowers to the Anderson family.