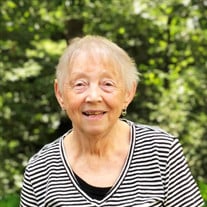 Ursula Gouhl (née Maier) passed away peacefully at Oasis Rehabilitation and Nursing home on June 12th, 2020 in Center Moriches, after a long battle with cancer. She was 80. Ursula was born on March 20, 1940 in Glauchau, Germany to her mother Theresia Maier. She graduated from trade school in Germany as a seamstress. Ursula emigrated from Saarbrücken, Germany to Brooklyn, New York in 1961, where she married Guenther Lind. After their divorce, she later married Charles Gouhl in 1973. The Gouhls lived in Brookhaven Hamlet, where Charles worked as an electronics salesman and Ursula was a homemaker, giving constant love to her children and supporting their activities. After being confirmed as an adult, Ursula became an active parishioner at Mary Immaculate Roman Catholic Church in Bellport. She enjoyed volunteering for the church and participating in the Rosary Club. During her senior years she was a compassionate caregiver for seniors and her grandchildren. Ursula loved the outdoors, often walking or biking by the water. She enjoyed vacationing in mountains of upstate New York. She embraced her German heritage, cooking traditional dishes for family and friends. Artistic and creative, she enjoyed crocheting and knitting, and was a skilled seamstress. She had a fondness for animals, and in her later years, she loved indulging her daschund, Heidi. Her husband Charles predeceased her in 1996. Ursula was a loving mother and is survived by her four children: Giselle Napierkowski of Jacksonville, FL; Caroline Lind of Patchogue; Erik Gouhl of Fayetteville, GA; Monique Tiedeman of Middleburg, FL; stepson Walter Gouhl of New Castle, DE; daughters-in-law Sandy Morales of Patchogue, NY and Kristin Gouhl of Fayetteville, GA; and son-in-law John Tiedeman of Middleburg, FL, and stepdaughter-in-law Laura Ulibarri-Gouhl as well as eight grandchildren: Katelyn Napierkowski; Anika, Ethan, Owen, and Calvin Gouhl; and John, Travis and Julianna Tiedeman. Visiting will be at Robertaccio Funeral Home on Thursday June 18, 4 p.m. - 6 p.m. A Mass will be at Friday June 19 at 10:00 a.m. at Mary Immaculate Church in Bellport. Interment will be at Holy Sepulchre Cemetery in Coram. In lieu of flowers, donations may be made to the American Cancer Society.

Ursula Gouhl (née Maier) passed away peacefully at Oasis Rehabilitation and Nursing home on June 12th, 2020 in Center Moriches, after a long battle with cancer. She was 80. Ursula was born on March 20, 1940 in Glauchau, Germany to her mother... View Obituary & Service Information

The family of Ursula E. Gouhl created this Life Tributes page to make it easy to share your memories.

Send flowers to the Gouhl family.