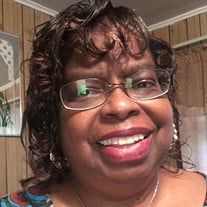 Valencia Raheem, was born on September 20, 1954 to the late Ray Diamond and Barbara Butler in Hempstead, NY. She was raised with her siblings in Bellport, NY where she resided until her peaceful passing on December 31, 2017. Valencia was preceded in death by her husband of 42 years, Muhammad Abdul Raheem; brother-in-laws Norman and Donald Rose, sister-in-laws Lillian Hector and Lori Diamond. She worked at Kastar in Bellport for 10 years until she found her gift and passion for taking care of others. Her journey began at Nesconset Nursing Facility and continued at Bellhaven Nursing Facility, Brookhaven Nursing Facility with her final stop at Good Samaritan Nursing Facility where she retired after 18 years of service. She has given over 30 years of service as a CNA. She always said, “Take care of those the way you want to be taken care of, it will come back to you.” Valencia leaves to cherish her memory 6 children: Samantha, Valencia, Shaheed, Zakiyyah, Hakeem and Ayesha; 5 grandchildren, and 2 great-grandchildren. Son-in-laws Darryl Bowe and Matthew Sorensen. Daughter-in-law Heather Raheem and sister-in-law Jeanette Rose. Brothers: Ernest Barrett (Claudia), Robert Butler (Phyllis), Anthony Butler (Liz), Eric and rAy Diamond. Sisters: Whilene McGary (Lester) and Christine Roundtree. A host of Aunts, nieces, nephews, cousins and friends. Valencia loved movies, plays, and concerts, traveling, reading and contributing to her community. Valencia loved children and always wanted a big family. The most kind, giving, peaceful person, Valencia gave to charities that supported our servicemen and women, the NYPD and Suffolk County Sheriff’s Department, the American Red Cross, the Susan G. Komen Breast Cancer Foundation, along with dozens of bags of food and clothing to local church groups for donation in the Long Island community. Valencia had an open mind and always seized the opportunity to broaden her horizons whenever possible. Born a New Yorker, Valencia traveled to the American South and the Midwest, up to Canada just because and down to the Caribbean because why not. No matter what you looked like, how much money you made or what you believed, if you were in need Valencia was there for you. An amazing mother, loving wife, caring grandmother and everything good in between, Valencia Raheem will be dearly missed.

Valencia Raheem, was born on September 20, 1954 to the late Ray Diamond and Barbara Butler in Hempstead, NY. She was raised with her siblings in Bellport, NY where she resided until her peaceful passing on December 31, 2017. Valencia was preceded... View Obituary & Service Information

The family of Valencia Raheem created this Life Tributes page to make it easy to share your memories.

Send flowers to the Raheem family.