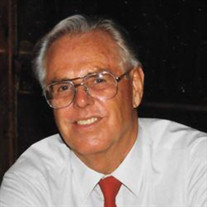 Vernon Lloyd Havens, longtime resident of East Moriches, died peacefully April 13, 2022 at the Peconic Bay Medical Center after a brief illness at the age of 96. Born August 23, 1925, he was the only child of Daniel Tuttle Havens and Helena Josephine (Raynor) Havens. Vernon attended Center Moriches High School. He joined the US Army shortly before his graduation in 1944 and was never able to attend his commencement, nor deliver his Valedictory speech. Vernon was a member of the US Army 28th Infantry Division and was a decorated sharpshooter surviving the Ardenne Offensive during the Battle of the Bulge, the Hurtgen Forest Offensive and the Liberation of Paris. Upon his Honorable Discharge he returned to Center Moriches where he apprenticed for his father as an Electrical Contractor ultimately starting his own business. As an Electrician, he serviced notable clients in the East End. Despite staying true to his craft, he never turned away the electrical needs of his customers. Upon his return from Europe, he was introduced by his cousin, Hazel Pye, to the love of his life, Alice Elnore Terry, whom he married September 11, 1949. They bought a small cottage on Paquatuck Terrace in East Moriches which they ultimately expanded to 4 bedrooms, Vernon doing the majority of the renovations. During this time, he joined the East Moriches Volunteer Fire Department where he was an active member for 53 years; most memorably fighting the fires of 1970 destroying the original fire house and elementary schools. He and Alice were active fixtures in the East Moriches United Methodist Church; Alice who sang in the choir and Vernon who served as Trustee for many years. He was a member of the Church’s Men’s Club, and actively participated in many fundraisers such as the Annual Scallop Dinner and Chicken Barbeque. Professionally, Vernon served on the Suffolk County Board of Electrical Contractors Association, The Soldiers and Sailors Memorial Committee as well as the Veterans of Foreign Wars. In August of 2021 he was honored by these groups at a parade in honor of his 96th birthday. Vernon felt that one of his (as well as his wife, Alice) most important endeavors was as father to his three children; Deborah, Suzanne and Craig. He was a devoted and loving father quietly supporting the many scouting activities, camping trips and sporting events while continuing to stress the importance of family. While all three of his children were adopted, he believed that his children were to be chosen and cherished. He was equally devoted to his beloved grandchildren whom he doted on and with whom he spent memorable times fishing, camping and swimming at Orient and Smith Point Beaches. We are comforted in thought that Vernon has gone on to join his beloved wife Alice, his parents, Daniel and Helena Havens, his granddaughter, Casey Aileen Connors, his son-in-law, Ahmed Allawi and daughter-in-law, Donna Wildman. He is survived by his loving children Deborah Connors (John), Suzanne Allawi (Robert Maher), Craig Havens and perhaps most importantly, his “sidekick in crime”, devoted dog, Cheyenne. If donations are preferred, they may be made in Vernon’s name to the East Moriches Soldiers and Sailors Memorial, the East Moriches Fire Department Benevolent Association, the East Moriches United Methodist Church or the Veteran’s of Foreign War. The family would like to thank everyone for their support, love and prayers.

Vernon Lloyd Havens, longtime resident of East Moriches, died peacefully April 13, 2022 at the Peconic Bay Medical Center after a brief illness at the age of 96. Born August 23, 1925, he was the only child of Daniel Tuttle Havens and Helena... View Obituary & Service Information

The family of Vernon Lloyd Havens created this Life Tributes page to make it easy to share your memories.

Send flowers to the Havens family.