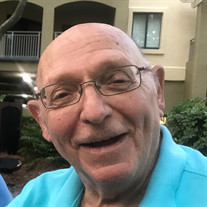 Wayne D. Cole passed away peacefully on Saturday, December 28, 2019. He was in his home surrounded by loved ones as were his wishes. Wayne leaves behind his wife Joan ( Gaffney) of 26 years; his children Christopher Cole, Jennifer Cole, Cristine McCloskey, Jennifer McCloskey, and Carolyn McCloskey ; his grandchildren Brian Cole, Christopher Cole, Jack Lacey, Noah Lacey, Molly VanVranken, Sarah Unger, Madeline Unger, Erin Seeley and Kelly Seeley; his siblings Doran Cole, Debbie Rich, and Bryan Cole. Born and raised in Des Moines, Iowa, son of Donald and Francis Cole, he joined the army after high school. He was stationed in Rocky Point, NY. This journey led him to the North Shore of Long Island where he married and began his family. During this time he developed a love for sailing, bought a boat that he named The Thistle, travelled with his family cross-country, baked pies with his children, took his family skiing, and started his career at the Power Company. Wayne worked for Long Island Lighting Company (LILCO) for the next 30 years as an electrical engineer. He was truly fascinated with electricity and power. During this time he met and married his present wife, Joan, who also worked for LILCO. Wayne was an amazing dad to Joan’s children as well. He was always a source of support and gentle strength for all of his children and grandchildren. Wayne could always be found working in the yard, gardening, walking his dog, enjoying his family, fishing, cooking, travelling with Joan, and was always up for any adventure. There are no words to express how much he will be missed by everyone. A celebration of Wayne’s life will be held on Tuesday, December 31, 2019 from 12pm- 3pm at: Robertaccio Funeral Home 85 Medford Avenue Patchogue, NY In lieu of sending flowers, please consider making a donation to St. Jude Children’s Hospital. This can be done online at : Stjude.org You can mail donations (checks and money orders only) to: ALSAC/St. Jude Children's Research Hospital 501 St. Jude Place Memphis, TN 38105

Wayne D. Cole passed away peacefully on Saturday, December 28, 2019. He was in his home surrounded by loved ones as were his wishes. Wayne leaves behind his wife Joan ( Gaffney) of 26 years; his children Christopher Cole, Jennifer Cole,... View Obituary & Service Information

The family of Wayne D. Cole created this Life Tributes page to make it easy to share your memories.

Send flowers to the Cole family.