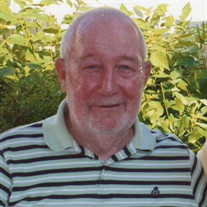 DELMORE, William Patrick Francis Xavier It is with great sadness that the family of William Patrick Francis Xavier Delmore announces his peaceful passing on Sunday, November 26, 2017 at the age of 90, enveloped in the love and comfort of his family. A beloved father, adored grandfather, and treasured great-grandfather, William is survived by his son James, his daughter Anne Harrington and her husband Thomas, his daughter Patti Diamond, his daughter Laura Speranza and her husband Robert, and his daughter-in-law Deborah Delmore. William is lovingly remembered by his grandchildren Billy, Tommy, Amy, Christine, Kristin, Erin, Jacqueline, Bobby, Rhianna, and DJ for making us laugh, telling the greatest stories, giving the best hugs, and always knowing just when we needed them. Great-grandchildren Liam, Quinn, Johnny, Savanna and Marko renewed his youthful joy. William’s bright smile, quick wit, and sense of humor will be missed by his nieces and nephews and by his friends, neighbors, church community and health care providers in Middle Island, New York. He joins his wife Joanne Lechner Delmore, his sons Billy and Tommy, his daughter-in-law Anna Oriente Delmore, and his sisters, brothers and parents in the Kingdom of Heaven. Son of Mary Russell and Francis Delmore of College Point, Queens, William is remembered for his years of devoted service to the New York City Fire Department, with whom he rose to the rank of Fire Marshal. He is also remembered for his service in the U.S. Navy during World War II, for his involvement with the veteran community, and for teaching others what it means to put faith, country and family before himself. His talent and love for football and softball will live on in generations to come. A funeral service in memory of William will be held at 10:45 in the morning on Thursday, November 30th at The Roman Catholic Parish of Mary’s Nativity — St. Ann in Flushing, New York. Internment with military funeral honors to follow at Mount St. Mary Cemetery in Flushing, NY. The family will receive friends from 2-4 pm and 7-9 pm at Robertaccio Funeral Home in Patchogue, NY on Wednesday, November 29. In lieu of flowers, please consider making a donation to the FDNY Burn Center(nyffburncenter.com), which cares for New York’s Bravest long after the fire is out. The light Bill brought to our lives will never go out. We will always carry his love in our hearts.

The family of William P. Delmore created this Life Tributes page to make it easy to share your memories.

It is with great sadness...

Send flowers to the Delmore family.