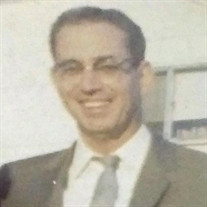 William A Low born April 3, 1926, in Dundee, Scotland, sadly passed away at the age of 94 on Sunday, April 12, 2020. William resided in Fort Hamilton, Brooklyn, during his youth with his mother, Jessie Low, father, George Low, and brother, David Low. William later signed up with the United States Army during WWII. After serving, William joined the Merchant Marines and received his radio operators license and went on to serve as a radio operator during war time while stationed in Vietnam for 1 year. He was lovingly called “Sparky” by all who loved and knew him. William is survived by his loving family: wife, Carol Low, daughter, Jessie Low-Maertz, son-in-law, Robin Maertz, son, William Low, Jr., daughter-in-law, Shirley Low, brother, David Low, sister-in-law, Ellen Low, as well as many nieces and nephews. William lived at home in Patchogue, NY, until he was 93 years old. After suffering some falls, he was admitted into Brookhaven Health Care Facility in Patchogue, NY. William was an extremely strong man and did not suffer from any major health issues until he contracted COVID19 at Brookhaven Health Care Facility and sadly passed away. William was retired for 29 years and enjoyed spending time with his wife, Carol, whom he loved immensely. William also enjoyed talking with his family and reading, especially about Scotland. He enjoyed tending to his tropical fish, his dog, cats, and birds. William enjoyed a good joke. William was a caring and generous man. William was a benefactor to many organizations that helped animals. He had a love for all animals, and he especially loved cats. William was deeply loved and cared for by his family and enjoyed many precious years together. He was a strong, intelligent, funny man, always a gentleman, always with a smile. He will be missed more than words can say.

William A Low born April 3, 1926, in Dundee, Scotland, sadly passed away at the age of 94 on Sunday, April 12, 2020. William resided in Fort Hamilton, Brooklyn, during his youth with his mother, Jessie Low, father, George Low, and brother,... View Obituary & Service Information

The family of William Allan Low created this Life Tributes page to make it easy to share your memories.

Send flowers to the Low family.