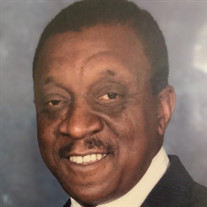 WILLIAM HENRY ROBINSON Sergeant William Henry Robinson, age 77, died peacefully at the Northport VA Hospice Facility on January 6, 2020. A veteran of the Korea-Vietnam conflicts, he retired as a civil servant with the Internal Revenue Service in Holtsville, NY. Sergeant Robinson is survived by his wife, Diane; his son and daughter-in-law, Dr. Charles James Parker and Anitra Parker; his grandchildren, Caryn, Alaina, and Charles William; and his brother, Carey Robinson. He is preceded in death by his parents, James and Daisey; and brothers, Lee James, Harry, and twins Jerry and Jeffrey. Sergeant Robinson was born on January 22, 1942 in Denmark, SC. He lived and worked in Manhattan where he met Diane and they were married. Sergeant Robinson later moved to East Patchogue Long Island and became the father of Charles James. Sergeant Robinson was a great man who was deeply loved by his family. He dedicated the majority of his life serving the community and established one of the first soup kitchens in the town of Patchogue. He enjoyed listening to music, dancing, and regularly attended mass each Sunday. His family and friends will always remember him as a knowledgeable and caring person. A service is scheduled for Wednesday, January 8, 2020 at 10:00am with the burial to follow at Calverton National Cemetery. The Reverend Hickman Alexandre, Vicar will officiate. All are welcome to attend and celebrate Sergeant Robinson’s life. The family would like to thank the Northport VA Hospice for the care and compassion given to Sergeant Robinson during the final days, St. James Episcopal Church, Robertaccio Funeral Home, Inc. Flowers and donations can be sent to St. James Episcopal Church, 260 Beaverdam Rd, Brookhaven, NY 11719.

The family of William H. Robinson created this Life Tributes page to make it easy to share your memories.

Send flowers to the Robinson family.