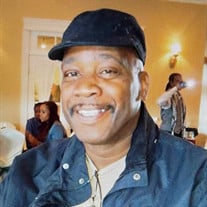 William Ross, 60 years old, of East Patchogue, NY, passed away on November 17, 2021. He was born on February 23, 1961, at 3:58 am in Copiague, New York. William was one of five children to the late Sylvia Jean Harrington and present William Clayton Ross. William was a strong, independent man that lived life on his terms. During his lifetime, he was employed at Arrow Security, GSN Trucking, Baron Honda and provided private security for clubs in the Hamptons. William was also a veteran who served in the US Army as a Cannon Crewman. His passions included reading James Patterson's books, going to Atlantic City, and staying at the Clarion Hotel while enjoying swimming in the warm pool there for hours. He also loved having Barbeques in the summer and playing spades with some of his favorite people, Taren, Connie, Charlott, Adrian, and Momma Angie. He enjoyed traveling with his wife Patricia, who would take lots of pictures to remember the moments. He also enjoyed watching his favorite TV show, Star Trac, professional wrestling, and other mystical fantasy action movies. He was very fond of Tyler Perry's plays, and he was also a beginner gardener and a member of the Mt Zion Missionary Baptist Church on 49 South Street in Patchogue, New York. Loving father to Patricia Gant, son in law Ricky Gant, Chad Gayles, Monica Ross, and chosen daughters Unisha Emanuel, Nya Silva, Kayla Swan, Keyana Swan, and Godfather to Tameka Tinsley and Cherished Grandfather to grandsons Kenji and Chase and granddaughter Jayde. Big brother to Sarah Ross, Debbie Ross, Jeffrey Ross, and Darren Ross. He is survived by his wife Patricia Ross, father William Clayton Ross, brothers Jeffrey and Darin Ross, and a host of nieces, nephews, cousins, aunts, and uncles. The visitation will be held at Robertaccio Funeral Home, Inc. in Patchogue on November 23, 2021, at 10 am; the funeral service is 11-1 pm. Military burial service will take place at Calverton National Cemetery, 210 Princeton Boulevard, Calverton, New York, on November 23, 2021, at 2 pm.

William Ross, 60 years old, of East Patchogue, NY, passed away on November 17, 2021. He was born on February 23, 1961, at 3:58 am in Copiague, New York. William was one of five children to the late Sylvia Jean Harrington and present William... View Obituary & Service Information

The family of William E. Ross created this Life Tributes page to make it easy to share your memories.

Send flowers to the Ross family.