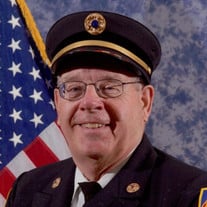 William Charles Rowse, age 77, died peacefully on Monday, October 12, 2020. Bill was the middle son of five sons born to the late E. Kevin Rowse and Gertrude (Burghbacher) Rowse on Dec. 27, 1942. At age 3 months his family moved around the corner. He was so exhausted by that move he never moved again. He attended local parochial schools , St. Francis de Sales and graduated in 1960 from Seton Hall high school. He was an excellent student as his parents never had to tell him to do his homework. He also worked while going to school as a part-time custodian at Seton. As a youth, he played Little League, was a Cub Scout and joined Troop 65 as a Boy Scout. He soon became a Patrol Leader and then Senior Patrol Leader and along the way became an Eagle Scout. At that time the Troop had several men's names listed as Scout Master but in truth Bill kept the Troop going using his leadership skills to occupy 50 scouts at the meetings with well-developed programs. He attended Camp Schiff in New Mexico which helped him develop those leadership skills. He also was elected to the Order of the Arrow, one of scouting's highest honors. As a 12-year-old youth he became an "ACE" carrier for NEWSDAY, and also delivered the Patchogue ADVANCE to his many customers. He attended Adelphi Suffolk college for 3 years and left to pursue a career in stocks with Wood Walker. But his real love was firematics. At age 19 Bill joined the Patchogue Fire Dept., Van Guard Hose Co. After leaving Wood Walker he worked for the Village of Patchogue briefly for the Sanitation Dept. and then became the dispatcher of the Patchogue Fire, Ambulance and Code Enforcement for the next 48 years. As a Volunteer fireman, Bill rose thru the ranks as 2nd Lieutenant, 1st Lieutenant, Captain and then proceeding thru the Assistant Chief positions culminating in becoming the Chief of the Patchogue Fire Department for the year 1985-86. Bill also served as the Dept. Points Secretary for the last 40+ years and was the Secretary of the PFD Exempt Firemen's Assoc., and President of the PFD Benevolent Assoc. Bill was also Co-Chairman for the Department when they hosted the Southern New York Volunteer Fireman's Assoc. Convention which coincided with the PFD 100-year anniversary in 1980. Bill reached far from Patchogue by being an officer in many local and State fire organizations. He was the announcer for all Long Island fireman's racing events and was known as "The Voice of Fire Department Racing." As a younger man he participated in racing with The Forty Thieves Racing Team. He also was main day time driver for the Patchogue Ambulance Co. for many years. Along the way, Bill was honored several times in his firematic career. Schaefer Beer, when it was in Brooklyn honored Bill as Volunteer Fireman of the Year many years ago for saving a life from fire. He also had an ambulance named for him by the Patchogue Ambulance Co. which has since been retired. His plaque still resides at the Ambulance Co. The arch at the Brookhaven Town Fireman's racing track in Ridge is also named in his honor. And six weeks before his passing, he was honored by many local fire departments with a parade of fire apparatus, ambulances, and racing trucks in front of his home on Cedar Ave. in Patchogue. Many of his friends from all over Long Island were there to greet him and wish him well. As his brother, I can say with certainty that Bill was a tough act to follow. Brian and I and our whole family will miss him. He was a loving and generous brother. Bill was predeceased by his parents E. Kevin and Gertrude Rowse and his brothers Kevin B. Rowse and Thomas C. Rowse and his nephew Kevin M. Rowse. His is survived by His brothers Lawrence E. (Linda) Rowse of East Greenbush, NY, and Brian P. (Nancy Felice) Rowse of Middle Island NY. Also surviving are nieces Laura Wicai, Kathleen Gillies, Kristine Phillips, Karen Reinbold, Kellynn Hickam and Emily Smith. Surviving nephews are Thomas, John, Barrett, and Morgan Rowse. Bill is also survived by several dear God Children, his beloved "Dutch" nephew Tyler Grauer, very special friends Peggy and Don Nogiewich, George and Jamie Grauer, Donald and Patty Shepherd and Eugene Perry. Arrangements by Robertaccio Funeral Home. Wake will commence on Sunday October 18 from 6 to 10 PM and Monday the 19th from 2 to 4 PM and 7 to 9 PM at the Van Guard Hose Co., 11 Park St., Patchogue. Firematic wake service Sunday at 7:30 Pm and Elks wake service Monday at 7:30 PM. Funeral at St. Francis de Sales R.C. church on Tuesday at 10:00 AM. Internment in Cedar Grove Cemetery. In lieu of flowers, donations may be made in Bill's memory to: New York State Elks Association Major Projects 33 Holcomb Rd. - Averill Park, NY 12018 or America's VetDogs PO Box 18 - Bohemia, NY 11716 or The Firemen's Home Please visit https://firemenshome.com/give/ to donate and specify that your donation is dedicated to the Butterfly Garden.

The family of William C. Rowse created this Life Tributes page to make it easy to share your memories.

Send flowers to the Rowse family.