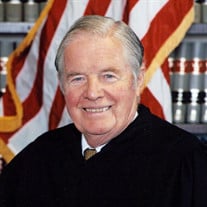 Hon. William L. Underwood, Jr., a lifelong resident of Patchogue, has died, aged 94, after a short illness. He is survived by his loving wife of 62 years, Barbara Hattemer Underwood, his four children, and ten grandchildren. Born to William L. Underwood, Sr. and Virginia Shand Underwood, he attended Patchogue High School and graduated from Seton Hall High School. A lawyer and retired New York State Supreme Court Justice in Suffolk County, Judge Underwood received his LL.B. from Brooklyn Law School in 1950, and his LL.M. in taxation in 1951 from New York University Law School. He was admitted to the practice of law, by the New York State Bar in 1952. Judge Underwood enlisted in the US Navy, serving as a lawyer in the Office of the Judge Advocate General’s office in Annapolis, Maryland from 1952-1954, advising on its legal matters. After the Navy, he was in private practice in Patchogue, also serving as lawyer for the Suffolk County Board of Supervisors and working in the family coal & fuel and real estate businesses with his father. He served as Justice of the Peace in Patchogue Village from 1965, then as District Court Justice until 1972, before his election to the New York State Supreme Court in 1972, at the time the youngest justice in that position. Re-elected to a second 14-year term in 1986, he remained on the bench until his retirement in 2004, retiring as its longest serving member. Judge Underwood was an Honorary Chief of the Patchogue Volunteer Fire Department in the Hook & Ladder Company, and its oldest living member, having started service at the age of 22, and accumulating 72 years of service to the PFD.. He was also an active supporter of the Hillsdale, NY Fire Department, and Fire Commissioner of the Davis Park (Fire Island) Fire Department. He loved his brothers in the Fire Department and reveled in their company, always looking forward to their fellowship on Sunday mornings. He was a longstanding member of Rotary International’s Patchogue Chapter. Additionally he is a past Chairman of the Board of the Congregational Church of Patchogue. He was a lifelong member of the Congregational Church of Patchogue. He also served on the Advisory Board of Brookhaven Memorial Hospital for dozens of years. He loved Patchogue and was a devoted member of the community. He married Barbara Hattemer Underwood in 1959 and is survived by children William Paul (Brian Chamberlin), Philipp James (Lori), Barbara Jean (Eric Russo), and David Lawrence (Dina). He dearly loved his grandchildren Elizabeth, Kyle, and Justin Underwood; Nicholas, Alexandra, and Philipp Russo; and Benjamin, Brooke, Bradley, and Blake Underwood, with whom he enjoyed happy times in Patchogue, on Fire Island, and at his farm in Hillsdale, NY. In his youth, he enjoyed sailing with the Wet Pants Sailing Club in Sayville, and ice scootering on the Great South Bay. He loved ice skating on West Lake in Patchogue, and skiing with family and friends. He was an avid snowmobiler in upstate New York. In his retirement, Judge Underwood continued his real estate business, and enjoyed traveling with his wife and friends around the US, Europe, and Africa, with family weekends in Davis Park, Fire Island and Hillsdale, NY. His older sister, Virginia Underwood Bissell, predeceases him. He is also survived by his younger sister, Carole Underwood Kennelly of Bayport, a niece, Meghan Kennelly Robohn, a nephew, William Kennelly, and a niece Elizabeth (Betsy) Ibos. Judge Underwood will be waked at the Robertaccio Funeral Home in Patchogue on Sunday, May 8 from 1:00pm-4:00pm and from 6:00pm-9:00pm. Funeral services will be held Monday, May 9 at 11:00am at the Congregational Church in Patchogue, 95 East Main Street. In lieu of flowers, the family requests donations be made to the Patchogue Fire Department or the Congregational Church of Patchogue. To donate online to the Congregational Church of Patchogue, please visit: churchonmainstreet.org and click "Donate" in upper right hand corner.

Hon. William L. Underwood, Jr., a lifelong resident of Patchogue, has died, aged 94, after a short illness. He is survived by his loving wife of 62 years, Barbara Hattemer Underwood, his four children, and ten grandchildren. Born to William... View Obituary & Service Information

The family of Hon. William Lawrence Underwood, Jr. created this Life Tributes page to make it easy to share your memories.

Send flowers to the Underwood, family.