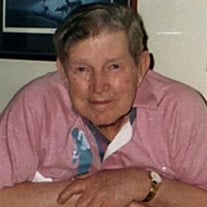 On September 28, 2020 Arthur Dick lost his long courageous fight against cancer. He was ninety-five. Known as Artie to his friends, Dad or Poppy to his three daughters Linda, Margie and Lori and his son-in-laws Joe and Patrick, and Pop Pop to his four grandchildren and spouses, Lisa Connelly (David), Erika Qualben (Erik), Patrick Gubbins IV (Rosanne) and Kyle Gubbins and his five great grandchildren Liam, Brenna and Ryan Connelly and Sophie and James Qualben. The one regret is he won’t be here to see the birth of Patrick and Rosanne’s baby who is due in March. He goes to join his wife Elizabeth or Babe as he called her, who he was devoted to and cared for during her own battle with Parkinson’s disease. In high school Arthur was an outstanding athlete whose dream of playing professional ball was cut short by an injury. He served his country in the Army Air Corp during WWII, flying in a B-17. After the war, his love and skill at drawing led him to Brookhaven National Laboratory (BNL) as Mechanical Designer where he worked his until retirement. He was well respected and liked by his fellow employees. Artie, was an excellent athlete and competitor, whether it was bowling, pitching softball or playing golf in the BNL leagues. He loved fishing and enjoyed spending time out east at Montauk with his wife Ellie. His granddaughters will remember him coaching their softball teams and his grandsons for being at the soccer games, cross country meets and music recitals. He was always there to lend a hand. He was a craftsman and helped his family with any project. But most of all he was an example of what a good person should be. Arthur was a quiet man, but in his silence, he taught all of us how to be courageous and strong. He will be sorely missed by his family and friends. Visitation for Arthur C. Dick will be held on Friday, October 2nd from 1 to 3 pm and 6 to 8 pm at the Robertaccio Funeral Home, Inc. in Patchogue. Closing prayers Saturday 10:30am. Interment will take place at Holy Sepulchre Cemetery in Coram, NY. In lieu of flowers, donations in Arthur's memory may be made to the American Cancer Society. To donate, please call 1-800-227-2345 or mail: American Cancer Society P.O. Box 22478 Oklahoma City, OK 73123

On September 28, 2020 Arthur Dick lost his long courageous fight against cancer. He was ninety-five. Known as Artie to his friends, Dad or Poppy to his three daughters Linda, Margie and Lori and his son-in-laws Joe and Patrick, and Pop Pop... View Obituary & Service Information

The family of Arthur C. Dick created this Life Tributes page to make it easy to share your memories.

Send flowers to the Dick family.