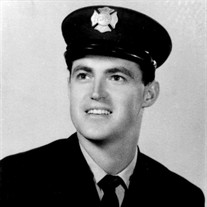 Frank V. Tonkin sadly passed away on Sunday, October 10th, 2021. Frank’s Irish heritage and love of big family life (he was one of thirteen) inspired him and his loving wife, Antoinette (Nettie), to create their own large brood, ultimately producing five children, nine grandchildren and nine great grandchildren. “Níl aon tinteán mar do thinteán féin” - There’s no place like home. Frank Tonkin was a Queens man through and through. After adventurous stints in Hawaii and Arizona in the late ‘70s and early 80’s, this native son returned with his family and re-established his roots in Whitestone, Queens. Born in Long Island City in 1934, Frank humbly began his work life at the Legion Utensil Factory, initially being paid with copper pots and pans that have since become family heirlooms. Short periods as a Pipefitter and at the Department of Sanitation couldn’t keep him from becoming a proud member of FDNY’s 21 Engine in Manhattan in March 1960 at the age of 26. He was later transferred to Ladder Company 116 in Astoria, Queens. The old neighborhood where he would fight fires and save lives until his retirement. The FDNY awarded Frank “The Certificate of Merit” In 1971 for the rescue of Jacob Fishbein, the proprietor of the well-known Fishbein’s General Store at 18th Ave and Astoria Blvd in Queens. Unfortunately, a bad fall in the line of duty in March 1978 forced him to retire - but Frank always valued his friends and never lost touch with his FDNY Brothers and we’re so proud to have the FDNY Color Guard Honors during his memorial visitation this weekend. But by then, Frank already had a wonderful family. He and Nettie, his childhood sweetheart and wife of 70 years, were extremely devoted to and busy with their five children. His three daughters brought him so much pride and joy, Karen the head of the brood inherited Frank’s take charge manner, Kathy his generous spirit and Christina his love of travel and adventure. He enjoyed building with his two sons, Kevin and Tim and passed on his many skills and talents to his boys. Dad would often say, "we don't call a handyman, we are the handyman". In 2021, when he and Mom moved to a newly developing gated community, Dad would watch over the construction in the distance and say, "I can teach them a thing or two". They found a new home here and he was happy knowing that when he was gone, Mom would be surrounded by beautiful gardens, treelined walkways and her kids around to watch over her. Frank enjoyed many years alongside Nettie, filled with pride at how his family grew. As proud as he was of his children, he was equally proud of his children’s choice of spouse. He looked forward to Sunday family day, enjoying Italian meals prepared by Nettie and beautiful daughters in law Maria and Kelly and watching sports with sons in law Sean, Ben and Simone. He would do anything for anyone of us. We knew it, we cherished him for it and will miss him so very deeply. You can rest in peace now Dad, knowing we'll take good care of Mom and the family you created. In lieu of flowers, we respectfully request a donation be made in our Dad's memory. St. Jude Children's Hospital www.stjude.org FDNY Foundation www.fdnyfoundation.org Thank you for honoring his memory.

Frank V. Tonkin sadly passed away on Sunday, October 10th, 2021. Frank&#8217;s Irish heritage and love of big family life (he was one of thirteen) inspired him and his loving wife, Antoinette (Nettie), to create their own large brood, ultimately... View Obituary & Service Information

The family of Frank V. Tonkin created this Life Tributes page to make it easy to share your memories.

Send flowers to the Tonkin family.