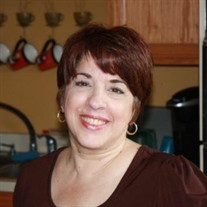 One of God’s greatest gifts given to her family was called back to the heavenly Kingdom on the evening of May 8th, 2022 at the sprightly age of 71. Joan Metzler (Amato) peacefully passed away in the comfort of her home surrounded by loved ones after a courageous long-fought battle with cancer. At the time of her death she was residing in the Western New York - Finger Lakes Town of Canandaigua, NY with her son John Falbo and his family. Joan leaves to cherish her memory her four children, Donna Bounauito, Jennifer Falbo, Jimmy Falbo and John (Cristina) Falbo; her six grandchildren, Robyn Feria (Bounauito), Dominic Falbo, Sofia Falbo, Roman Falbo, Avery Falbo and Yazlynn Falbo; her twin-sister, Jeanette (Sal) Russo, nephews, nieces and a host of other relative and friends. Joan is predeceased by her parents, two older siblings, and her husband of 27 years, Robert Metzler. Born on April 17th, 1951 in Brooklyn, NY to Anthony and Anna Amato (Carcione), Joan and her twin-sister Jeannette had two older siblings, Dominic and Mary Anne. At age 9, Joan and her siblings were moved to their long-time family home on the corner of Shinnecock Avenue and Cumberland Street in Mastic, NY. At age 17, Joan Amato became Joan Falbo after marrying childhood friend, Jimmy Falbo, with whom she birthed her four children Donna, Jennifer, Jimmy and John. Though Jimmy and Joan divorced after 18 years of marriage, Joan continued to raise her children in her Mastic Beach home until eventually moving back to her childhood home to live with her mother and three youngest children in 1988. The greatest and most loving family memories came from this home in the following years until Joan met her soulmate Robert (Bob) Metzler, married him in 1993 and then moved to his home in Middle Island, NY where they would live as a blended family for the next 11 years before moving to Florida in 2004. From 2004 to 2016 Joan and Bob resided in Ocala, FL then moved to Mount Dora, FL until Bob’s passing in 2020. Joan then lived with her son Jimmy in Leesburg, FL until moving to upstate NY with John in 2021. During her years with Bob, Joan became a devout Christian with an impassioned love for Jesus. She and Bob spent hours in group and individual bible study, rarely missed a Sunday church service, and lived their everyday life to align with the teachings of Jesus. The relationship they had with each other was permanently solidified by the relationship they each also had with God. In sickness and in health was not just a standard marriage vow for them as the last 8 years was a true testament to the meaning of what this vow actually meant. In 2014, Joan saw her first cancer diagnosis, which was then followed by Bob’s decline in health and eventual diagnosis of Dementia. Then in the last months before Bob passed away from his terminal disease, Joan was re-diagnosed with cancer in 2020. Their love for each other and God got them through these years of health struggles always together. Even in Joan’s last moments of life, we believe that Bob came to be by her side after a special necklace spiritually connected with him was placed around her neck. A prayer was said for her soulmate to come and bring her home, at which time Joan became visibly comforted in peace and soon after took her final breath on earth and her first breath in heaven. Joan’s love of her children and grandchildren is simply indescribable in words. She loved seeing and being with her family and even just talking on the phone or video chatting. Her beaming smile that could be seen anytime Joan was immersed with family is a great gift she has left behind for anybody who bore witness to it and can close their eyes to easily picture it again. Joan’s six grandchildren were the most precious gift to her, and even when she was in the most weak and fatigued state prior to her passing, Joan’s face lit up with that great big smile when a grandchild would enter the room; still even managing to point to her lips representing her traditional well-known request to always give her a “kiss on the lips.” Joan’s love for life will live on through those who were closest and know that she would not want everybody mourning and dwelling over her death. There is no doubt that her exact words would be, “what good will being all depressed about it do?” She would want everybody to remember her life, her love, her smile, and all the special moments that we were blessed to share with her here on earth. She will remind us that she is with Bob now, both released from their worldly diseases and living together pain-free in eternity. She will tell us to keep our faith in God that we will see her again one day. Despite knowing that she would say these things to ease the pain, her voice, her touch, her love will still all be painfully yearned for as the years pass on. But, it is with certainty that she will be the first one waiting at the gates of heaven to meet her most precious children, grandchildren, twin sister and other loved ones once again with that great big smile and open arms ready to give her standard giant squeeze with her head pressed tight against their chest while rocking back and forth, then ask for that “kiss on the lips.” In lieu of flowers, you may choose to make a donation in memory of Joan Metzler to the Sands Cancer Center in Canandaigua, NY by following the link: https://securelb.imodules.com/s/1676/giving19/giving19.aspx?sid=1676&gid=2&pgid=4629&cid=6853&appealcode=19R33 You can select the Sands Cancer Center under the "Gift Designation" button.

One of God&#8217;s greatest gifts given to her family was called back to the heavenly Kingdom on the evening of May 8th, 2022 at the sprightly age of 71. Joan Metzler (Amato) peacefully passed away in the comfort of her home surrounded by loved... View Obituary & Service Information

The family of Joan Metzler created this Life Tributes page to make it easy to share your memories.

One of God’s greatest gifts given to her family was called back...

Send flowers to the Metzler family.