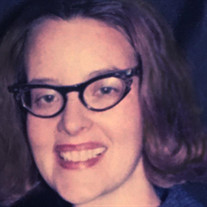 Mrs. Kathryn Adair Stafford, 81, of East Patchogue, NY passed peacefully away on Wednesday, March 21 following a brief hospitalization. She was embraced in the love and care of her family and friends and the compassionate care of her doctors, nurses and aides. After years of heroic struggle against her COPD, Adair is finally at rest. She was born in July 1936 in Forest Hills, New York to John and Mary (Maddock) Fletcher. After attending Holy Cross Academy, the University of Vermont and the Katharine Gibbs School, she married Yorke Nelson on October 10, 1959. In 1975, Adair moved with her three sons to Patchogue, NY where she began her career as an administrative assistant to County Legislator John Foley. She joined and eventually became the president of the St. Francis DeSales DSC group where she met her current husband, Timothy Stafford. They married on January 21, 1987. Adair loved to work with her hands, creating hand-painted porcelain and all manner of needlework, knitting, and crocheting. Adair is survived by her husband, Tim, her sister Janet (David) Reese, and her three sons, Edward (Jackie) Nelson, William (Lois) Nelson, and Christopher (Karen) Nelson. Grandchildren include Mary Lee, Kristina and Amy (Ed), Jessica and Jonathan (William), and Jeffrey and Katie Rose (Chris). She is also survived by cousins, nieces and grand-nieces and -nephews. She now rejoins her parents who preceded her in everlasting life. A memorial service in celebration of her life will take place at the Robertaccio Funeral Home, 85 Medford Avenue, Patchogue, on Saturday, March 31 from 2pm to 4pm. www.robertacciofuneralhome.com. In lieu of flowers, gifts may be made to the American Lung Association in her memory.

Mrs. Kathryn Adair Stafford, 81, of East Patchogue, NY passed peacefully away on Wednesday, March 21 following a brief hospitalization. She was embraced in the love and care of her family and friends and the compassionate care of her doctors,... View Obituary & Service Information

The family of Kathryn A. Stafford created this Life Tributes page to make it easy to share your memories.

Send flowers to the Stafford family.