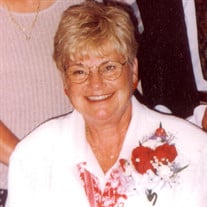 Renee Alevas, 90, a resident of Patchogue for over 70 years, passed away on Nov. 30 after a long illness. A Holocaust survivor, Mrs. Alevas was born in Berlin, Germany on Aug.1, 1929 and escaped to France during World War II. She came to the United States at the age of 18 to live with her aunt and uncle in Patchogue and attended Patchogue High School for one year, where she met her future husband, Gus Alevas. She went on to earn a Bachelor of Arts and Master of Arts in education from Adelphi University and taught fifth and sixth grade in the Bayport-Blue Point School District, from which she retired in 1990. She traveled the world with a group of retired teachers, visiting places such as Senegal, the Amazon, the Nile and the Galapagos Islands, and spent summers at the family beach house in Davis Park. Mrs. Alevas was a firm believer in giving back to the community that took her in after her escape from Germany. She got into politics by campaigning for fellow teacher Paul Harenberg for state Assembly and served as his administrative aide in Albany for one session in the early ‘80s. She served as a trustee in the Village of Patchogue from 1983-1995, the first woman to be elected to the board of trustees in the history of the village. She chaired many committees, including the Beautification Committee and the Bicentennial. She was also an executive board member of the Democratic Jeffersonian Club and a 35-year member of the Woman’s Club of Patchogue. She was selfless and generous beyond measure. Mrs. Alevas is survived by her daughter, Debbie Zampariello and husband, Frank; her son, Donald Alevas and wife, Cindy; her five grandchildren, Carly, Nick and Matthew Zampariello, Lauren Grella and husband, Tony, and Brandon Alevas; her two great-grandchildren, AJ and Owen Grella; her cousin, Ilse Toth, and her nieces and nephews and many friends. She was predeceased by Gus Alevas in 1995. In lieu of flowers, memorial donations may be made to Patchogue Theatre for the Performing Arts, 71 East Main Street, Patchogue, NY, Attn: Clara Iacopelli, and would be appreciated by the family. Visitation for Ms. Alevas will be on Tuesday, December 3rd from 3 to 7 pm at the Robertaccio Funeral Home, Inc. in Patchogue, NY. Family and friends are welcome to gather at the funeral home on Wednesday, December 4th, between the hours of 9 am and 10 am. A Closing prayer will be held at 10 am followed by interment at Cedar Grove Cemetery in Patchogue, NY.

Renee Alevas, 90, a resident of Patchogue for over 70 years, passed away on Nov. 30 after a long illness. A Holocaust survivor, Mrs. Alevas was born in Berlin, Germany on Aug.1, 1929 and escaped to France during World War II. She came to the... View Obituary & Service Information

The family of Renee Alevas created this Life Tributes page to make it easy to share your memories.

Send flowers to the Alevas family.