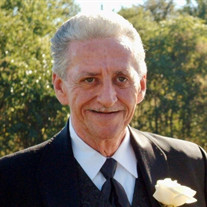 Richard “Richie” Goerke passed away peacefully on February 21, 2020 in Orlando, Florida. He was 80 years old. Richard is survived by his daughter Christine Goerke Holloway (James) of Teaneck, NJ and his son Douglas Goerke (Jane) of Orlando, Florida, by his granddaughters, Lauren Goerke, Margaret Holloway and Charlotte Holloway, and by his sister Mary Miceli (née Goerke) and brother Arthur Goerke. He is preceded in death by his first wife Marguerite Goerke (née LoCascio), and his second wife Carrol Goerke (née Dookram). Richard was born on December 31, 1939 in New York, New York to Charles Goerke and Frances Goerke (née Wagner). He served in the US Navy on the USS Coral Sea CVA 43 in 1960-61. He married Marguerite LoCascio on May 5, 1968. After her untimely passing, he married Carrol Dookram on June 29, 1991. Always quick with a joke, Richie loved to make people laugh. He served as Commander of the American Legion - Post 269 in Patchogue, NY. He was also a proud lifetime member of both the Veterans of Foreign Wars - Post 2913 and the AMVets Post 111 also both in Patchogue, NY. His generosity and good will in the service of fellow veterans will long be remembered. Visitation will be held on Thursday, February 27, 2020 at Robertaccio Funeral Home (85 Medford Avenue, Patchogue, NY 11772), between the hours of 2 and 4pm, and again between the hours of 7 and 9pm. A funeral mass is scheduled for 10 am on Friday, February 28, 2020 at St. Francis de Sales RC Church in Patchogue, NY (7 Amity Street, Patchogue, NY 11772) Burial will be at Calverton National Cemetery. All are welcome to attend and celebrate Richard’s life. In lieu of flowers, the family requests that donations be made in Richard’s memory to the Gary Sinise Foundation, which honors our defenders, veterans, first responders, their families, and those in need. www.garysinisefoundation.org

The family of Richard Goerke created this Life Tributes page to make it easy to share your memories.

Send flowers to the Goerke family.