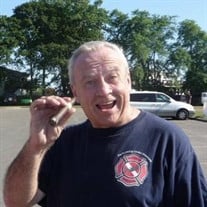 Richard J. Murphy of Patchogue, New York, passed away peacefully on Tuesday August 14, 2018 – his 64th birthday – surrounded by family at Stony Brook University Hospital. Richard was born on August 14, 1954 in Brooklyn, New York, to Jeanne (née McMahon) and Bernard Murphy. The oldest of seven, Richard graduated from Immaculata High School in Somerville, New Jersey, in 1972 and the University of Scranton in 1976. Richard and his wife, Debra, were married on August 6, 1977, and later had three sons, Ryan Murphy (Patchogue, New York) Craig Murphy (London, UK) and Thomas Murphy (Corvallis, Oregon). Richard worked as a Mortgage Banker and was employed as the Sales Manager at Wells Fargo Home Mortgage, in Islandia, New York at the time of his death, playing a major role in interactions in his community. Considered an expert in his field, he was invited to speak at many functions held by various organizations, from unions to church communities. Richard was dedicated to serving his community of Patchogue, a dedication that he and Debra passed on to their three sons. In addition to being an active and often tireless member of the Patchogue Fire Department alongside his son Ryan, he was also a member of the Brookhaven Town Fire Police Association, the Patchogue Chamber of Commerce and the Long Island Council of Churches. To help instill a teamwork ethic for the younger members of the community, he previously served as a registrar, coach and referee for the Patchogue Medford Youth Soccer League, a referee for the National Futsal League and a baseball coach in the Patchogue Youth Athletic Association. As an avid Mets fan, Richard loved watching games with his family and talking baseball stats with his sons. He also enjoyed fishing, another interest he shared with his sons when they were younger. He was eagerly looking forward to becoming a grandfather in September 2018 and sharing his love of baseball and fishing with his first grandson. Richard is survived by his wife of 41 years, Debra (née Di Pasquale) Murphy; his three sons, Ryan Murphy, Craig Murphy (and wife Michaela) and Thomas Murphy; his two sisters, Jeanne Cancellieri and Kelly Murphy; three brothers, Kenneth, Christopher, and Frank Murphy; several nieces and nephews; and numerous friends in Patchogue and beyond. A wake will be held at Robertaccio’s Funeral Home, 85 Medford Avenue, Patchogue, New York, on Saturday, August 18, from 1:00-4:00pm and 7:00-9:00pm. A brief funeral service will be held at the same location on Sunday, August 19, at 10:30am.

The family of Richard J. Murphy created this Life Tributes page to make it easy to share your memories.

Send flowers to the Murphy family.