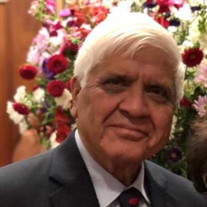 It is with profound sadness that we announce the sudden and unexpected passing of our beloved husband and father, Dr. Zafar ul-Hasan Fatimi of Bellport, New York on December 18, 2018 at the age of seventy-three. Zafar was born June 1, 1945 in India and moved to Karachi, Pakistan with his immediate family during the Partition of India and Pakistan in 1947. He was considered a bookworm as a child and began college at the age of fourteen. At twenty-four, Zafar immigrated to America to study anesthesiology. One his fondest memories when he first moved to America was all the ice cream available in the supermarkets. He fell in love with his physician wife, Khem, while training at Downstate Hospital in Brooklyn. He set down roots in Bellport, New York in 1974 where he proudly raised three daughters, Safia, Tanya, and Meena. He spent much of his career at Brookhaven Memorial Hospital in Patchogue. Zafar was an avid reader and crossword enthusiast. Since his retirement from clinical practice, his daily ritual was a five-mile run followed by a visit to the Bellport or Southold Library. He and Khem are active members of the Bellport Rotary Club. He loved to unwind at his beach home in Southold, travel the world with Khem, and relax in his easy chair surrounded by his four grandchildren, Yasmeen, Farah, Salma, and Kalyan. As the eldest brother, he helped his six siblings and their families with their educations, careers, and successful immigration to the United States. He recently celebrated the marriage of his youngest daughter, Meena to Lynly on December 8, 2018. The wedding was an extended family reunion with relatives travelling from Canada, California, and Pakistan to join in the festivities. He and his siblings recently sponsored the construction of a new school in Karachi, Pakistan in honor of their father, Professor Amanat Ali. The school was built through the The Citizens Foundation (TCF), a non-profit organization whose aim is equal education of girls and boys. He is survived by his wife of 47 years, Khem Pradhan Fatimi; his daughters Safia of Port Washington, Tanya of Katonah, and Meena of New York. He will be remembered fondly by his children-in-law, Ramon Muñoz, Arjun Ganesan, Lynly Egyes; his grandchildren, Yasmeen, Farah, Salma, and Kalyan; and his siblings and their families--Zia and Zainab of Boston, Zareena of New Jersey, Nilofer and Saulat of Karachi. Visitation at Robertaccio Funeral Home, Patchogue NY, Thursday December 20, 2018. In lieu of flowers, donations can be made to The Citizens Foundation – Attention: Professor Amanat Ali School. Tcfusa.org

It is with profound sadness that we announce the sudden and unexpected passing of our beloved husband and father, Dr. Zafar ul-Hasan Fatimi of Bellport, New York on December 18, 2018 at the age of seventy-three. Zafar was born June 1, 1945... View Obituary & Service Information

The family of Dr. Zafar H. Fatimi created this Life Tributes page to make it easy to share your memories.

It is with profound sadness that we announce the sudden and unexpected...

Send flowers to the Fatimi family.